Himself
Samuel Haight was a kind of "Ultimate Badass" to the World of Darkness. Former Kinfolk, former ghoul, former Skin Dancer, former Mage, currently an ashtray somewhere in the ruins of Stygia.

Kin to the Children of Gaia, he was haunted by his failure to Change. Setting out on his own, Haight became a hunter, who by the age of thirty, had hunted and killed almost every type of natural animal on the planet. He decided to start hunting supernatural creatures.

Haight started hunting vampires, where he learned about the power of Kindred blood and became an independent ghoul. He managed to kill a Tremere warlock in his haven, and with the blood, ledgers, and tomes of his victim, began to learn Thaumaturgy. He then traveled the world, hunting and studying mystical secrets, searching for the secret of becoming a Garou. In India, he hunted with secret cults that worshiped forbidden gods. One of these cults told Haight of the Ritual of Sacred Rebirth, which would allow him to become Garou, but at the cost of the skins of five werewolves.

Haight had problems getting his hands on the skins, as Ronin and other solitary Garou were hard to find. He tried the rite with the skins of different fera, but to no avail. But after years of hunting with limited success, he learned of the Valkenburg Foundation, where they treated Lunatic Garou and cured them of their derangements.

Haight spent five years learning the routines and secrets of the Valkenburg Foundation, and preparing for the day where he would be ready to undergo the Rite. During this time, he began to become tainted by the Wyrm. Eventually he got everything he needed and performed the Rite of Sacred Rebirth, undergoing the First Change and becoming Garou. He then used a fetish, Shedding the Spirit Skin, something he took from a Black Spiral Dancer he killed, to enter the Umbra.

As soon as he stepped sideways for the first time, he was faced with what his actions had done. Seeing the Wyrm-tainted environment that was his home and the Banes that had been attracted by his actions drove Haight temporarily insane. He used his fetish again and fled into the Deep Umbra.

Haight ended up in the domain of Ischin, a powerful Wyrm-creature exiled ages ago by the Garou. It imprisoned Haight and tried to use his Shedding the Spirit Skin fetish to return to the material plane. However the unintentional intervention of several Sabbat vampires foiled its attempts, and allowed Haight to reclaim his fetish and escape.

Later he traveled to the Amazon, where he took the Conquistador's Sword from the Uktena Metis Owl Eyes Bane Snatcher, which he used to steal several Garou gifts. He then searched for the Dreamspeaker El Dorado. After finding him, he killed him with the Conquistador's Sword, with the intention of stealing the mage's power for himself. The sword shattered, unable to contain the power of the mage, but did grant Haight rudimentary knowledge in several Spheres and a basic knowledge of mages and the principles of magic. El Dorado's Black Fury allies tried to kill him by summoning Wyld spirits and he was believed to be killed, but in fact managed to escape into the Umbra.

After becoming a powerfully Wyrm-tainted kinfolk-werewolf-independent-ghoul-hybrid, he traveled to the farm of the Crombeys, a coven of Verbena, and asked to join their chantry in exchange for teaching them Tremere Thaumaturgy. However, Alistair Crombey knew of Haight's actions, so Haight killed his wife and destroyed the World Tree, stealing a magic pumpkin branch in the process. The magical artifact Haight acquired provided him with an Arete rating, and thus he became for all intents and purposes, a Mage.

A few months later, Haight traveled to New Orleans where he aided the Camarilla by informing them of a vampiric slaving ring. He planned on receiving the Embrace and becoming Kindred, but he later found out the price of doing so and decided against it.

Haight then attacked a small Orphan Chantry in California, killing the mages and absorbing the chantry's Node into the Staff of the World Tree. He then searched for an Antediluvian, and believed he had found one from reading the Book of Nod. He then destroyed the Chantry.

In MTAs: The Chaos Factor , Haight proceeded to Mexico City to take on the Baali "Antediluvian" Shaitan – although it was not a proper Antediluvian, but "only" a methuselah. Pursued by the player characters, Haight did not survive the whole event, due to their interference, his end being either the fight against Huitzilopochtli or a massive Paradox explosion.

He then found himself in the Shadowlands, and according to the WTO: The Book of Legions , was soulforged into an ornamental ashtray on a minor Hierarchy functionary's desk, never to be seen again.

At least until MTAs: Mage: Judgment Day , where we are presented with one small scene of the book, where the character is buffeted by detritus from the Underworld. One of the items is – you guessed it – an ashtray.

Players finally got to kick his power-hungry over-templated behind again in a Werewolf: The Apocalypse 20th Anniversary Edition SAS entitled Skinner, wherein a follower of his attempts to become his reincarnation. Assuming he succeeds, his soul is freed from the ashtray and becomes... a normal, if strong, werewolf that is not protected by the metaplot. Thank Gaia.

The ashtray may have ended up in the possession of reclusive billionaire Howard Barclay, as the entry "Weird ashtray, Haight?, $25" appears on an appraisal list by medium Meadow Walters.[1]

Samuel appeared in a short story in the WTA: When Will You Rage? anthology.

When the Garou kidnap the son of his love interest from college days, Sam starts to hunt. He happens to be in San Francisco because he was selling info about the makeup of the Garou Nation to Developmental Neogenics Amalgamated – an evil company listed as antagonist in WTA: Werewolf: The Apocalypse Second Edition . The price he demanded? A genetically enhanced clone of himself. 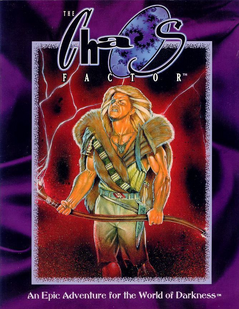 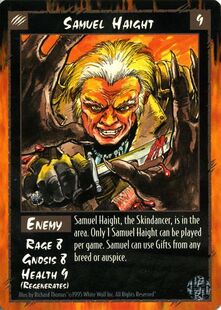 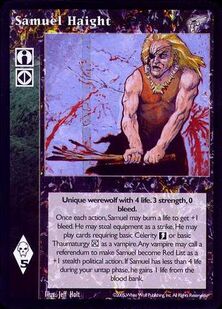