Salvador García is a Brujah Anarch, currently residing in Los Angeles. He played a pivotal part during the Second Anarch Revolt, but later betrayed the Anarch Free State to the Kuei-jin.

Born in Spain in the late 1800s, Salvador García was the son of Spanish farmers. In young adulthood, García joined various movements occurring Spain. During his tenure in one of these groups, García was beaten by the police, and while he would not recover, his savior appeared in the form of a vampire named Ferdinand. Ferdinand offered García both immortality and to keep fighting oppression, and Salvador accepted.

Now a vampire, García joined the Brujah in fighting back against Ventrue controlled Spain. In a successful attack on the Prince of Barcelona, García's sire was destroyed, and with him the Spanish Anarch movement. García promptly fled to the United States, making his way across the country and coming to rest in Los Angeles in the 1940s.

Along with Jeremy MacNeil and other notable Anarchs of the time, he plotted the Second Anarch Revolt. When the revolt finally came to fruition, García led a party on Prince Don Sebastian Juan Dominguez's home on the night of the revolt. It is claimed that García was able to kill the Prince in one-on-one combat, and this became a rallying tale for the Anarchs, as García killed a vampire three generations below him.

After the revolt, García authored the Status Perfectus, and since then, the Anarch has traveled abroad helping various revolutionary groups in their struggles. During his travels, he witnessed the inefficiency and disorder of the Anarchs and came to believe that they were just another bunch of thugs, no better than the Sabbat. MacNeil hindered him from challenging Mohammed Al-Muthlim and the Crypt's Sons, who Garcia believed to be a Sabbat pack that were trying to infiltrate the Free State. This made him very pessimistic for the Free State's future, until the first Kuei-jin arrived in 1999.

The Cathayans promised to wipe out the Crypt's Sons in exchange for his loyalty. García, who did not want to risk his men's unlife against the foreigners, accepted the deal. He came to believe that the New Promise Mandarinate was a better chance for equality than the Free State had ever been, for it avoided the old gangland feudalism that had dominated the Free State.

García has learned a great deal about the Cathayan culture, but believes them to be religious nutjobs. He does not share their belief in the Yama Kings or the coming of the Sixth Age. 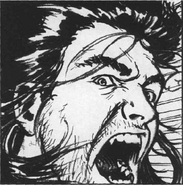 Retrieved from "https://whitewolf.fandom.com/wiki/Salvador_Garc%C3%ADa?oldid=226040"
Community content is available under CC-BY-SA unless otherwise noted.