Ruth McGinley is the Malkavian primogen of Dallas. Her derangement manifests in the constant need to be in control.

Born as the daughter of Irish farmers, Ruth was raised to be an obedient wife and married by the age of 15 to an abusive drunkard. When she opposed him one night, she accidentally cracked his skull open and fled to England afterwards. After several months as a beggar on the streets of London, she had saved enough money to escape to the New World.

Determined to begin a new life, she settled in Virginia and began to perform various menial housework. Her temper and refusal to submit to the drudgery of daily life, however, brought her trouble regularly. When she damped hot soup on her employer after an insult, she attracted the notion of a Malkavian, who found her amusing. He took her with him and gave her the Embrace. She and her sire stayed together for a long time, until Ruth went on to the Frontier, eventually ending up in Texas. She found the life of a gunslinger much to her liking and became very famous in the region around her haven, both for her deadly skills as well for her gender. Unfortunately, she attracted the wrath of Lupine pack and was forced to enter Torpor.

She reawakened in the Texan oil boom, in which she quickly situated herself, seeing them as gamblers and hustlers like those in the Old West. She eventually became the Primogen of Dallas for her influence and age. Ruth is a firm enemy of the Sabbat and answers incursions across the border by assembling war coteries and leading them to counter-strikes across the Mexican border. 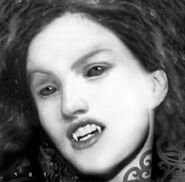 Ruth McGinley VTES card
Add a photo to this gallery

Retrieved from "https://whitewolf.fandom.com/wiki/Ruth_McGinley?oldid=239752"
Community content is available under CC-BY-SA unless otherwise noted.