Rosamund of Islington was an eighth-generation Toreador of stunning beauty who acted as ambassador for the Courts of Love. She is the signature character of her clan during the Dark Ages, when she became romantically involved with Lord Jürgen von Verden.

A fair English rose, Rosamund was born in Islington, outside of London, to a minor Norman baron and his Saxon bride. Beautiful even as a child, she came to the attention of a wandering troubadour in service to the Courts of Love, who praised her beauty to his mistress, Queen Isouda de Blaise. Through her mortal vassals, Isouda arranged to have the girl fostered in her court. Having other children to provide for, Rosamund's parents bid their 12-year-old daughter an affectionate farewell and let her be taken to France.

Isouda's court in Chartres was an exciting new world for the impressionable young girl, filled with challenges and the education of a young French lady. She learned to read and write, both in Latin and French, learned comportment and etiquette, and to observe and decipher the politics of court. She became familiar with the music of the troubadours and the rules of love, learned to appear both modest and coquettish, to spar with her wit, and charm with her smile. On her seventeenth birthday, she was called once again into Isouda's presence and congratulated on her accomplishments. Then Isouda told her of her destiny: to be initiated into the ranks of the Cainites, to take her place as Isouda's true daughter and protégé in the greater arts of the night. Rosamund's diplomatic mission to Magdeburg was but one of the carefully planned steps in Isouda's training regimen before the Queen put Rosamund to the greatest test of her childe's unlife.

Rosamund was then introduced to the Paris court as part of the Courts of Love's scheme to oust tyrannical Alexander from the throne. Rosamund's impact on the disturbed prince proved to be far greater than anyone expected. So great was his fascination with her that the Queens of Love allowed him to take Rosamund into exile with him – as something of a consolation prize – a decision on which Rosamund herself was not consulted.

The past few years have been the most frightening and difficult of her entire existence. Her faith in the Courts of Love, her allies, even her sire's affection has been badly shattered, and then weakened still further by Alexander's subtle and cruel manipulation of her very perceptions. The ancient methuselah's obsessive jealousy will settle for nothing less than total possession and absolute adoration from the object of his affections, yet Rosamund finds her heart drawn once again toward Lord Jürgen, Prince of Magdeburg, and Alexander's reluctant host.

Now forever seventeen and exquisitely beautiful, Rosamund's Saxon blood shows in her fair skin, hazel-green eyes, and fine hair the color of spun copper. She still retains something of an adolescent passion in her voice and mannerisms, and when in a good mood she chatters and laughs easily. But now she must rely on everything she has ever learned to help her survive the nights to come, for when his jealousy peaks, Alexander has been known to destroy the thing he most loves... 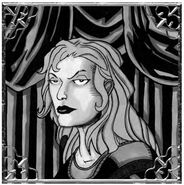 From Dark Ages Clan Novel: Toreador. Art by John Bolton
Add a photo to this gallery

Retrieved from "https://whitewolf.fandom.com/wiki/Rosamund_of_Islington?oldid=201674"
Community content is available under CC-BY-SA unless otherwise noted.