Rosa Hernandez, also known as Rose, is a Gangrel resident of Chicago.

Like many young children, Rosa Hernandez wanted to help animals, and longed to become a veterinarian when she grew up. Her veterinary ambitions died after she found out what "putting to sleep" meant, but her longing to help animals never did.

When she attended the University of Chicago in the early '70s, all her friends were involved in the peace movement. However, Rosa's raison d'être was the ethical treatment of animals, and she was one of the most prominent and active members of Chicago's budding animal rights movement. 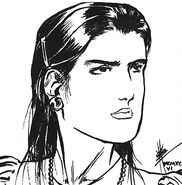 Retrieved from "https://whitewolf.fandom.com/wiki/Rosa_Hernandez?oldid=220461"
Community content is available under CC-BY-SA unless otherwise noted.