Rome was the capital of the Roman Empire in classical antiquity, and was a major political zone for both mortals and Kindred. It served as the birthplace of the Camarilla, and also as its resting place.

The history of Rome in the Chronicles of Darkness is analogous to the real-world Rome. They share the same creation myths involving Romulus and Remus, shared the same historical events, and even the same historical figures. The one piece that sets the difference is the Propinqui, or the native-born Roman Kindred. As Rome's senate began to falter, its Kindred equivalent lay in the Camarilla, the ultimate governing body for the ancient vampires.[1] The Kindred of Rome would continue to ebb and flow along with the city, staying in step with its peoples.

The legend of Romulus and Remus plays a part in some Kindred creation myths. After Romulus killed Remus and left him for dead outside of the city walls, Remus was visited that night by a Strix with a concord; the Strix will raise Remus and his line to greater than that of his brother's, if only that Remus will pay the Striges due respect when the time comes. [2] Thus, the Kindred were born into Rome. While the Kindred of Rome knew that vampires resided in places such as Egypt and Gaul, they were not Propinqui and viewed as foreigners.

The night of Romulus' theft of the Sabine women, Remus found a distant relation of Romulus', Aulus Julius. Remus found Julius alone, having been unable to procure a wife for himself during the kidnapping. Here Remus led Julius into the catacombs of Rome, and Embraced him. The number of Kindred rapidly grew, and a dark analogue of the city above grew in the catacombs below. Here the Necropolis was founded and populated by the Kindred of Rome, and where they lived for hundreds of years.

Above, the Roman Republic endured for centuries. Below in Necropolis, the Propinqui formed their own form of governance, called the Camarilla. Founded by Julius Aulus, who became known synonymously as Senex, as a dark form of the Senate above for the Kindred. Housed in the center of Necropolis was an area named Elysium; here no harm or threat was tolerated for fear of repercussion.

During Augustus Caesar's reign, the Propinqui are forced to adopt a stricter Masquerade to survive. People from all over the world flock to see Rome, and in turn bring with them other clans of vampires. The Propinqui tolerate them, for they are not Kindred.

With the rise of the Empire and the fall of the Republic, the Camarilla is remade after a period of civil unrest. The new Senex is another extension of the Caesar, one that legislates the sin of the Empire. [4]

Kindred Society is tested as Rome burns for five days. In their fear the Kindred turn on each other, and the notion of Elysium is cast aside as they destroy one another. [5] Many Kindred are destroyed, while others fall into Torpor, unfound for centuries. When the fire subsided, only a fifth of all Kindred were left. It would take a decade for the Camarilla to be remade, but at the end of its reconstruction the Kindred find they were not alone; the Christians had been using the upper levels of Necropolis as refuge from persecution. The Kindred began to test these Christians and their faith.

Rome and its Kindred endured until the second plague comes. The Propinqui laid claim to the uninfected, and left the sickened humans for the rest of the clans. The plague had no lasting effects on most of the Kindred, but they found that Christianity became more prevalent, and the Lancea et Sanctum first appeared in Rome. [6] The Propinqui persecuted the Lancea et Sanctum as the mortal Romans persecuted the Christians above, with the same outcome; another follower of Longinus' would take the place of his fallen brethren.

The Christian Kindred increased, and they began to break apart the Camarilla slowly. The Kindred who worshiped the old Roman gods became the pagan, and the minority. The Lancea et Sanctum began to pressure Kindred society as Constantine had with the mortal world. Eventually, the Camarilla shattered as the Roman Empire was sacked, and the reign of Rome ended for mortals and Kindred.

Most clan were represented at some point in Rome. Of these clans though, the Julii were the rulers and considered themselves the first Kindred and Propinqui, and merely tolerated the other clans. The other clans were considered lesser, and though they shared similar appetites for the living, they were not Kindred.

Circa 360, Rome had around thirty unique locations in itself, many of which were Kindred haunts. Below is a map of Rome from the period.[7] 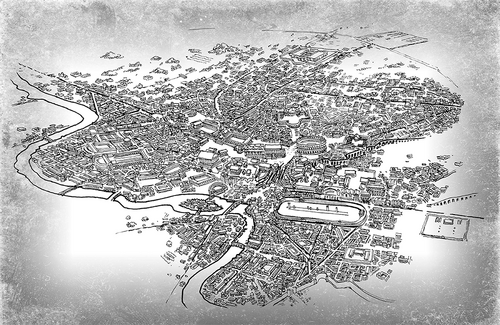 This Vampire: The Requiem-related article is a stub. You can help WWWiki by fixing it.
Community content is available under CC-BY-SA unless otherwise noted.
Advertisement