Roger de Camden, born as Rowan, is the Hecata Prince of Edinburgh and Pater of the Cult of Mithras, whom he previously served as Seneschal. Camden is one of the few survivors of the purge of London by the Second Inquisition, and one of the even fewer survivors of the Cappadocian purge.

Roger de Camden was born Rowan, in a small area of rural England. Rowan had a gift for communing with the dead and hearing the whispers of ghosts around him. Even as a child Rowan was obsessed with dead things, collecting small animals he found in the fields and streams to listen to the stories of their lives and deaths. He would spend his time in cemeteries listening to those who had passed, and then relaying their thoughts to loved ones who still lived. People were thankful for Rowan’s messages, although some were scared and he fought against some persecution as word of his gifts spread. Eventually he became the town’s soothsayer, and was famously known for his sage advice and ability to speak with the dead. Such was this gift that it caught the attention of a Cappadocian named Constancia, who became his mentor as she took him to see the wider world. After introducing him to the rest of her clan, Constancia Embraced Rowan under the moon of Constantinople.

As a vampire, Rowan was able to more intimately understand the nature of death and the soul. He could not only hear the spirits of the dead, but command them with the vitae that flowed through his veins. Rowan became obsessed with learning everything he could about the soul, and the various states it could exist in within the body of both Kindred and kine. He went on a pilgrimage through Europe, studying the soul in these various forms of existence. He created many childer in this time, not out of loneliness, but from a curiosity to experiment and collect more intimate data. When he visited Paris, a ridiculous mispronunciation by the local Toreador changed his name from Rowan of Campden to Roger de Camden. He decided to keep the name, and remained in Paris for some time studying the catacombs beneath the city and several Parisian elders who humored his research in return for boons. When de Camden heard the methuselah Mithras returned to London in the 11th century, he felt compelled to learn more about one of the oldest vampires of Europe. He traveled to London with the intention of interviewing the ancient. Mithras received de Camden well, and a rapport grew between them over time. De Camden came to understand how lonely Mithras was beneath his godlike mantle. The two eventually became lovers, and Mithras promoted de Camden to Seneschal. Throughout this all, they kept their relationship secret – love, true love, is a liability among vampires.

Roger de Camden was some sort of a diplomat between the Ventrue and the Cappadocians; his position as Seneschal of London had allowed him to enjoy the riches of the city and experiment with dead corpses at will. He was also a proficient architect and engineer, constructing several secret havens across London to conduct his experiments. He was trusted enough by Mithras to act as his representative in proceedings with the Founders.

Camden had the theory that death occurs when the soul leaves the body, as such, he was a follower of the Road of Bones, and many other Cappadocians waited for his next discoveries. He believed that perhaps everything his clan has done and found about death may be wrong, so every study about the subject must begin with no assumptions. He was also a proficient historian, believing that Lazarus and Japheth, childer of Cappadocius, had been the same person and managed to decipher the location of Lazarus' haven in Egypt.

Around the year 920, Lord Camden met a mortal nun named María Asunción. He was impressed by her True Faith and decided to Embrace her.

When the Giovanni began killing their Cappadocian elders, de Camden became a target. In a letter to Constancia, he made clear that he was tired of being hunted and had accepted the inevitable, but in reality, he invented the Ritual of Transferring the Soul to convince the Giovanni that he was dead when they attacked his haven in 1514. Roger de Camden became Pater Thomas, transferring his essence to a new Cainite body, with only Camden and Mithras knowing the truth. Mithras himself slaughtered the surviving attackers to perpetuate the ruse. "Thomas" continued to lead the Cult of Mithras.[1]

In Beckett's Jyhad Diary, it is revealed that a vampire calling himself De Camden has publicly reappeared in the 2010s. His current agenda is unknown, but he advises the Harbingers of Skulls and seems to be on working terms with Angelique. Though he identifies with the Harbingers, he is clearly not one, as he retains the appearance of a Cappadocian.[2]

Following the assassinations of Queen Anne and Monty Coven and the widespread extermination of the London Kindred by the Second Inquisition, Camden is presently Prince of Edinburgh (or possibly acts as Steward of it for the deceased Mithras[3]). He also serves as Pater of the Cult of Mithras, with those Kindred who fled London with him each possessing a vial of Mithras' vitae. Camden's own words imply that Mithras/Coven foresaw the Second Inquisition and warned Camden and the other Mithraic cultists, who then abandoned London at his command.[4]

Roger de Camden has taken to wearing traditional Cappadocian robes while in the privacy of his own Haven. Ceremonial in form, they’re a dark black linen edged with symbolic embroidery with floral and skeletal motifs. His skin is pale and soft, eyes round and hollow with age, hair golden and shoulder length. He’s of average height and slender build, rather unassuming except for the ghostly connections that seem to emanate from him. Thomas dresses quite different in public, keeping with the young professional fashions of the decade to appear approachable, modern, and to fit in with the crowds. Jeans, a t-shirt, and a jacket of some sort is his current go-to outfit. This fashion, combined with his unassuming demeanor, allows other Kindred to underestimate or overlook him. Thomas uses this tactic so that he might get close to Kindred, or send his spies to watch them without them noticing.

Camden's name is "Roger de Camden" in Dark Ages: British Isles. In the Giovanni Chronicles he is called "Thomas Becket", and in London by Night he is "Thomas Camden". In the Encyclopaedia Vampirica, his full name is given as "Lord Thomas Beckett Camden". Finally, in the V20 and V5 setting he is once again referred to as Roger de Camden. 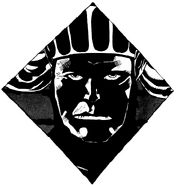 De Camden during the Dark Ages