Dr. Reiner Stoschka was a Malkavian active during the Victorian Age. Some tie him with experiments in regard to the Daughters of Cacophony.

Reiner Stoschka was a Viennese Malkavian who had become fascinated with the advances in science during the 19th century, particularly the 'soft sciences' such as the nascent study of psychology. He came to believe that most factors of the Kindred experience, like Clan Curses, aversion to daylight, associated Disciplines and similar, had psychological reasons

As a founding member of the Gentlemen's Society for the Rational Investigation of Super-Natural Matters, Stoschka was involved in experiments on Kindred, in most cases the young and easily influenced. One result of these experiments has been claimed to be the Daughters of Cacophony. 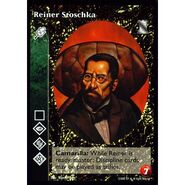 Stoschka VTES card
Add a photo to this gallery

Retrieved from "https://whitewolf.fandom.com/wiki/Reiner_Stoschka?oldid=229597"
Community content is available under CC-BY-SA unless otherwise noted.