Griffon
The Red Talons are one of the tribes found in the werewolf community. They are the only tribe among the Garou that is exclusively lupine in nature (save for a very few metis), shunning humanity completely as a blight on the Earth.

Wolves have no concept of time like humans do. Yet the Red Talons, despite their attempts to deny it sometimes, are not wolves and so, elements of oral tradition have become rooted into their tribe. The Talons tell stories to acknowledge sadness and grief, but the concept of a far away "past" remains elusive to most. In moots, temporal distances are usually expressed as "some time ago".

The Talons tell that their Tribe was formed directly from Gaia and that they remained the purest Garou that kept in touch with their original shape. In their myths, humans were originally prey and therefore unable to understand the laws that govern the relation between predators and prey. It was through the gifts of the Wyrm that humans learned to take from other predators and become hunters themselves. When one of these humans killed another predator, a wolf, Gaia decided to bless the other predators with tasks to help her to keep the world in balance. Every predator got a task, while some species who failed at it were demoted to prey status (like the Apis). The Wyrm, however, came to Gaia and reminded Her that the humans were predators, too. Since She had no task left for them and wished to give her creation a place, she instead granted the other predators the ability to interbreed with the humans, to teach them. To the Talons, this exposed the early Fera with the taint of the Wyrm through their invading human-minds. Other, more radical, Talons even maintain that the connection to humanity is a curse inflicted by the Wyrm upon the Fera, transmitted through sexual intercourse or after biting a human and tasting its blood.

To the Red Talons, the Impergium was the original task every Garou was envisioned for. However, through the corruptive influence of their human minds, the other werewolves began to behave like humans themselves. They mated with each other and produced the First Metis, they took human villages under their protection and interbred with them, so that they gradually forgot that they were meant to cull them. In time, this lead the One Tribe to splinter, as the Garou became bound to particular human cultures and ultimately led to the Concord. Those Garou that had chosen to not consort with the humans attended, but since they had no singular alpha, they remained unheeded for much of the debates and during the compilation of the Litany. In the night short before the end of the gathering, a powerful Ahroun named Fells-Trees stood up and confronted the leading Silver Fang, asking him what they were supposed to do about the ever-growing population of humans, now that they were no longer allowed to cull them; and why the wolves' vote had not been counted. The Silver Fang answered that he did not know that the wolves were a tribe and asked him for the name of it. When Fells-Trees pressed on that names were not important, the Fang answered that without a tribal name, the wolves would be considered a pack of marauding scavengers. Angered, Fells-Trees lashed out against the Fang, leaving a bloody swath of claw marks upon his chest. This, Fells-Trees proclaimed, was the name of his tribe and that he would now wait for an answer. From the cuts, the name "Red Talons" was derived, as well as the earliest glyph used in the Nation.

The Talons accepted the ruling of the Silver Fangs as their alpha tribe, but remained wary as they watched the extinction of species like the mammoth at human hands. During the War of Rage, the Talons trusted the judgement of their alpha, but thought it a War born out of human hatreds that made no sense and secretly made deals with some of the Corax or overtook the stewardship over sacred places of the Gurahl. Many modern Garou tend to see the Red Talons as complicit werewolves that sought to kill homid-born Fera, an insult which they accept to guard their secrets.

The Red Talons watched the rise of cities and human infrastructure with ever growing suspicion. Other Garou regarded them as prophets and mystics with great insight into Gaia and the Wyld, a reputation strengthened when Songs of Shadows brought the Prophecies of Shadow that predicted the fall of Constantinople in 1204. The Red Talons suffered most under the Flaying Plague unleashed by the Circle of Red against the Garou.

During these nights, the Red Talons often practiced a diminished form of the Impergium, where they stalked and attacked those humans that ventured into the woods after nightfall.

The Red Talons, as a rule, had amiable relations with the Pure Tribes. While the people of the Pure Tribes were humans and thus, responsible for the extinction of species, the Talons respected that the Pure Tribes had at least tried to teach them about balance and controlling their breeding impulses. There were even isolated Talon septs within unclaimed territories near the Wendigo, who had coexisted for centuries. As the wilderness in the Old World shrunk and wolves were hunted systematically, many Talons fled into the New World, to fight the growing threat of the Storm-Eater and secure new protectorates for themselves.

Contrasting to amiable relations to the Pure Tribes, the Red Talons regarded the Bunyip as usurpers and thieves. Since they did not even breed with wolves, but with thylacines, many suspected that the Bunyip had killed all native wolves in Australia. The Talons that came to Australia bred with dingoes and similar diluted creatures, and thus were susceptible to the Wyrm. Their prejudice lead the Talons to starting the genocidal War of Tears, a war that most Talons feel little regret over.

As their Kinfolk packs are decimated, the Wyld places recede and humans continue to choke the planet with cities, pollution and mining, the Talons have realized that they cannot win the Apocalypse. The construction of "reservations" and "national parks" (or, Gaia forbid, "zoos") is proof that humanity has won, that they can decide which part of Gaia and the Wyld to despoil and which not.

In reaction to this, the Tribe has issued the Winter Council. In order to address the excessive growth of humanity, the Winter Council will reinstate the Impergium in secret. These "Winter Packs" are recruited from Lupus and raised in absolute isolation and then unleashed against human cities. The first city to be targeted was Montreal and the Talons plan to expand their activities. In Europe, Margrave Konietzko has allied with the Talons by allowing them to cull specific groups of humans, leading to most of the European Talons supporting him as the new alpha.

The arrival of the Red Star, and visions of the destruction of a great monstrosity in Bangladesh prove to the Talons that the End Times are finally here. Soon, they will again ask Fells-Trees question on how to control the human population, and this time, they expect an answer.

Red Talons live similar to wolf packs, with the strongest and most able serving as an Alpha. Some of their Septs are closed off to any homid visitors. There is little global communication between the Tribe, although the Red Talons often have knowledge of hidden Moon bridges that lead to their most valuable Caerns.

Factions and camps are a human perversion, a division along philosophical boundaries that is alien to the Talon mindset. Still, through centuries of being forced to deal with human-thinking Garou and their even-weaker kin, even the Red Talon tribe has not been impervious to infiltration of these divisive mentalities.

Perhaps no other tribe is as close to nature as the Red Talons. They shun cities completely, exclusively living in their ancestral homelands as they have for centuries. As humans encroach on the wilderness, the Red Talons find their lands and hunting grounds disappearing and destroyed.

Given their backgrounds, few Talons are comfortable with Weaver-things of any kind. Most see value in klaives, and a few even appreciate the usefulness of a gun or telephone. But, for the most part they communicate via howls and fight with claws and feel that should be enough. Still, the other tribes admit the Talons have long memories, and no doubt recall rites and secrets long forgotten by the rest of the Garou.

As a rule, the Talons eschew the use of human languages except when absolutely required by their Pack alpha. Most have enough proficiency in the Garou Tongue, but among themselves, the Talons communicate in the language of wolves, which works mostly over body language and other senses, like scent. They are also the only Tribe that cultivates special "Howl" Gifts, that utilize their wolf howls in magnificent ways.

Although not all Red Talons believe humanity should be wiped out entirely, it is agreed among all tribe members that humans are to be shunned. Those that dare cross the path of a Red Talon, guilty or innocent, will be killed to stop the spread of the Wyrm's taint. Many secretly devour the flesh of their victims, however, which goes directly against the Litany set forth by the Garou Nation. In addition, some younger Red Talons have taken to torturing their prey, akin to the way humans have drawn out the suffering of the Red Talons.

The Red Talons have a bloodline in Africa, the Kucha Ekundu. The Kucha Ekundu have made a pact with the Mokolé that allowed them to breed with the native African wild dogs. In return, they promised to protect Africa's wilderness and keep peace with the native Fera. They also follow Griffin and shun any contact to humans. In recent days, they have become part of the multi-Fera alliance known as the Ahadi.

The Talons come almost entirely from lupus stock; only in the last few decades have they even accepted Metis that come from Talon-Talon matings. Many Talon Metis are still culled at birth or given to the Children of Gaia to rear. To the Red Talons, metis are the result of their human side, since wolves do not practice recreational sex and thus are regarded with shame.

The Red Talons follow wolf traditions closely, using strength and survival to decide who rules over them. Crimes against Red Talons go through no compromise; those involved will be killed by wolves seeking justice. Challenges of Rank are in most cases non-lethal.

Walk through a city some night, and look up at the sky. Try and find a star, any star. You´re lucky if you can even see Luna herself up there. Imagine you had the power to punish the people concealing the pure sky from you. Here is the source of the Red Talons´ rage. They can see the pure sky; they live in pure, clean, wild lands, but every day some idiot ape bulldozes another hundred acres to put up another 200 cookie-cutter suburban homes. The answer is obvious to the Red Talons: kill all the humans. Yet this is precisely what the other tribes refuse to do.

The Red Talons have a unique relationship with the Wyld. Seeing the Wyld as release, as a reminder how the world was before, when humans had not yet used the Weavers tools to ensnare it and fallen under the Wyrms sway to defile it. Seeing the similarities between the Wyld and themselves, the Talons often dedicate themselves to strengthening Wyld places and pursuing alliances with Wyld spirits that other Garou would find dangerous. Some voices in the Nation even whispers that the Red Talons are close to falling from Gaia to the Wyld, as the White Howlers did long ago to the Wyrm. The Talons themselves refuse to comment such claims. 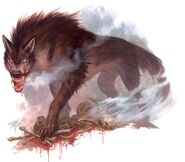 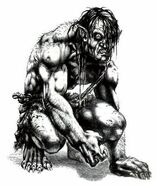