Rebekah is a 5th generation Ventrue, the Monitor of Chicago, who diablerized her own sire a long time ago.

As a street urchin of illegitimate parentage in first-century Judea, Rebekah spent her childhood in Roman-occupied Jerusalem, a strife-ridden time and place where one misstep could prove fatal. She was rescued from the streets and forced into the life of a servant-girl attending a lesser patrician. As were so many of her ancestry and station, she was regularly beaten and made victim to her master's unwholesome desires, and soon she learned to hate the aristocracy and all they represented.

Other dissidents, noting her discontent, her strategic position as adjutant to a city official, and the uses to which she might be put, took the adolescent Rebekah into their confidence. Zealots, they came to be called in those early days – rebels who would not submit to the Roman idol-worshippers, their pagan practices, or their avarice-borne taxpayer census.

These insurgents, led by Judas of Galilee, maintained normal-seeming lives as subservient elements of the citizenry while spearheading civil disobedience, information networks, and even covert acts of upheaval behind the scenes. Rebekah soon acclimated to this notion of a double life by collecting missives and snippets of overheard conversation from her master's chambers and redistributing them among her newfound brethren.

But it was not enough. The servant girl longed to do more, to be more, to strike a genuine blow against these invaders who would gorge themselves while others endured want. Her stubborn fervor and seemingly limitless determination ultimately put her in contact with a circle of like-minded extremists. These sicarii ("dagger-men") – political assassins so radical that not even the Zealots would associate with them – gladly welcomed a female recruit into their midst. Rebekah's master was found shortly thereafter with a blade buried in his throat, and his former servant left behind the life she had known for an exhilarating dual existence along the razor's edge.

At length, her involvement with the sicarii came to an end, as her last target, an elder of the Roman court, made her continued stay in Jerusalem too dangerous. Rebekah fled south from the city and there sought refuge at the estate of an anonymous benefactor, a retired statesman and sympathizer to her cause.

And there Elihu the Monitor (then going by the name of Elias Andronicus) of Clan Ventrue taught her that other arenas existed wherein the battle against injustice and oppression might be fought. Rebekah’s activities and whereabouts faded somewhat from Cainite view at this time; she was never one to maintain close ties with her clanmates, and her sire bade her accompany him from a Palestine that was no longer safe.

They became lovers, traveling the continent for centuries, sampling  what pleasures the Mediterranean and adjacent territories had to offer until fate and ill fortune trapped them in the wrong time and place: Barcelona, staging ground for the Spanish Inquisition. Rebekah and Elihu quickly found themselves little better than prisoners, besieged on all sides by race-based persecution and rapidly tightening nets of witch-hunters.

Their rescue came in the form of Rafael de Corazón, Renaissance craftsman and father of the august body history would later call the Camarilla. The Toreador offered them membership in his fledgling order in exchange for their withdrawal from the mortal world. Although Rebekah wanted to refuse his offer and challenge what she perceived as de Corazón's cowardice, Elihu unhesitatingly pledged their cooperation and support. The particulars following this first and fatal disagreement between sire and childe are not publicly known, but Rebekah left the city of Barcelona alone and unfettered. The elder Ventrue was never heard from again.

Again she wandered the globe, perhaps haunted by the ramifications of what she had done, perhaps seeking something more than the parasitic existence she had been leading for millennia. Her travels took her to the eastern Cathayan shores, lands Elihu had always sought to visit. Like many others of the Inconnu, whose ranks she would later join, she chased the redemption of Golconda there for a time. One rumor has Rebekah allegedly subsisting for months at a time without feeding, a residual benefit of her experiments with such ascetic's practices as ritual starvation.

Atop Mount Ararat, she was approached by an ancient unlike any she had previously encountered – a Cainite, countless millennia old, who claimed to be Rafael's sire. The methuselah told her of others like herself, powerful elder vampires who wished only the blessing of solitude with which to while away eternity. Rebekah joined the ranks of the Inconnu the next evening.

For nearly two centuries since joining the enigmatic Inconnu, the Ventrue methuselah has served as Monitor of Chicago. Lodin's fall has thrown the city into a state of continuous flux and her observations are needed now more than ever. But Rebekah herself has not proven immune to this upheaval. The rise of the anarch presence has rekindled primal, irresistible urges in her, bringing old memories to the surface, and inspiring her to cross the line between watching and acting. Already she has met with the insurgents left in Maldavis' wake (what many of these dissidents do not realize is that Maldavis herself was more often than not a lens Rebekah used to spy upon and guide the anarchs for years). It is only a matter of time before she marshals their number to some – any – end.

Rebekah bears the classical beauty of a Renaissance painting or Roman sculpture. While not exactly "gorgeous" in a modern context, the combination of her mystical, vampiric allure and divine bearing make her tremendously attractive. Her wavy black hair frames a pair of green eyes, and her skin has the tone (and feel) of fine marble.

She dresses to fit into the crowd by adopting modern fashions and shedding them almost before they change. She is remarkably adept at portraying the mannerisms of young vampires – which other vampires more than two millennia in age have difficulty doing. 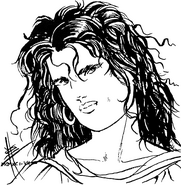 Rebekah in Chicago By Night 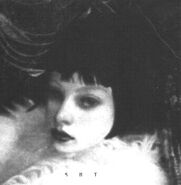 From Beckett's Jyhad Diary. Art by Ken Meyer, Jr.
Add a photo to this gallery

Retrieved from "https://whitewolf.fandom.com/wiki/Rebekah_(Ventrue)?oldid=235725"
Community content is available under CC-BY-SA unless otherwise noted.