Ratkin are wererats, one of the Changing Breeds of the Classic World of Darkness. In the Middle Kingdom, the corresponding term is Shubei (ratlike scoundrels) or Shukuei (Rat Demons).[1]

Like most of the Breeds, Ratkin were given a mission by Gaia, and that mission was to control the human population by eating their food and spreading disease and pestilence. It worked until the Garou attempted to impose their dominance on the other Breeds in the so-called War of Rage, and nearly drove the Ratkin to extinction. In the aftermath of the War, the Ratkin were forced into the margins of human society; however, because of the rapid urban growth, they recovered and once again are in ascendance. Ratkin are feral and brutal creatures, mainly because they are Wyld-touched, which means that not only can they frenzy like other shapeshifters, but also hallucinate in a state called Rapture.

Ratkin are still very distrustful of Garou even now, not least because one of their aspects was completely destroyed during the War of Rage - the Bards, equivalent of the Garou's Galliards. However, before the last Bards were slain, they foretold that in the final days the Ratkin would come back from their secret refuges.

More than any of the other Changing Breeds, Ratkin feel the touch of the Wyld. They believe the Weaver is just as insane (and as intent on destroying the world) as the Wyrm. Because of this, wererats are as likely to strike out against manifestations of the Weaver as at the Wyrm. The other Changing Breeds are blind to the true enemy and humanity has become its main pawn. As a result, the Ratkin are very hostile to humans and see them of little worth besides breedstock. Their dislike for humans has gone so far that they focus more and more on their animal kin, forsaking any ties to their other part and becoming more and more bestial.

The Ratkins’ ties to madness can unveil hidden knowledge. One of the most profound sources of this knowledge is their mysterious Blood Memory that connects wererats to both their ancestors and, to a more limited extent, their relatives. A wererat who is in danger can utter a silent scream called "keening" that can only be heard by other Ratkin. Ratkin can only keen when threatened, but no other supernatural creatures can duplicate this sound.

Ratkin are immune to disease, thanks to the effects of the Birthing Plague. Their blood is also poisonous, making it inedible for vampires and were-spiders.

Ratkin are formed via the Birthing Plague. While fatal for regular humans, Kinfolk can survive it and will emerge as full Ratkin, though after-effects and derangements are common.

There are three breeds.

A small number of Ratkin learn to assume one of three other forms through practice:

The Ratkin are divided into 9 Aspects, much like the Garou's auspices. Five are considered the 'standard' Aspects, while the other four are the so-called 'Freak' Aspects.

The five original Aspects are:

As mentioned above, the fifth Aspect, the Bards, were destroyed in the War of Rage.

There are also nine great Ratkin Plagues, who claim a particular geographical territory as their own.

Within each Plague, all Ratkin are organized in Colonies centered around Kinfolk habitations. Old and respected Colonies are sometimes built over a Caern, becoming Nests. Ratkin colonies have a strict internal hierarchy. A Rat King rules the colony, attended by packs of courtiers — usually all rodens Ratkin. Below the courtiers, rodens wererats have priority. Metis hold the middle ground, acting as guards and wardens and hoping to one day become courtiers. The homid breed sits at the bottom of the pecking order, taking whatever scraps they can get.

Ratkin that leave their Colony form packs between five and ten members that possess a strict hierarchy. One Ratkin leads, while one is always the runt, given the worst duties and the least respect. Some runts leave for other packs, or find ways of getting revenge upon one of the higher-ranking members. If the attempt at revenge succeeds, the runt’s victim often becomes the new runt.

The Litany of Survival

Formed during their exodus to the Umbra, the Litany of Survival is what governs the modern rat-changers. The Knife-Skulker Aspect enforces the Litany.

Crinos form of a Ratkin, hairless and probably metis 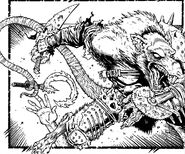 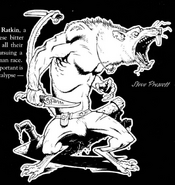 A Ratkin, illustrated by Steve Prescott 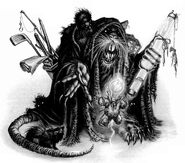