Rage is a mystical wellspring of primal anger granted to the Garou by Luna. It allows them to move at great speed, shrug off mighty wounds, and change forms quickly. It can also power some Gifts.

Because Rage was a gift from Luna, creatures with rage are susceptible to silver. Fera that do not have Rage (such as the Nuwisha) do not suffer from this susceptibility to silver. Some of the Fera are instead susceptible to gold because they are devoted to Helios. The connection to Luna also affects how susceptible a Garou is to Frenzy based on the phase of the moon. A full moon causes a Garou to be very prone to their Rage overtaking them, while Garou are least susceptible to frenzy under the new moon.

Mechanically, Rage is rated from one to ten and comes in permanent (dot) and temporary (point) forms. Temporary Rage can be spent to gain extra actions or change forms. Temporary can be regained through strong emotions related to violence (such as physical danger) or by catching sight of the moon. It can go higher than the permanent rating only in rare circumstances.

If a Garou is out of both temporary Rage and temporary Willpower, he loses the wolf. He returns to his breed form and cannot change shapes until he regains at least one point of each. He cannot regain Rage while he is out of Willpower. If he loses his last dot of permanent Rage, he will lose the wolf permanently.

The starting Rage of a Garou is determined by his Auspice. Ragabash start with the least Rage, while Ahroun starts with the most. Other Fera assign starting Rage based on other criteria. Spirits also use Rage, both as a substitute for physical attributes and as a means of powering their mystical charms.

Rage may not be spent in the same round as Gnosis, unless the activation of a Gift requires the spending of both Rage and Gnosis. 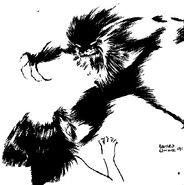