Ragabash is one of the five Auspices under which a Garou may be born. He who is born during the New Moon acts as the mythic tricksters, the fool who is alternately foolish and wise. He plays the role of the contrary, questioning tradition in order to find the wisest path.

The Ragabash are the Auspice with the least Rage, even less than the Theurges considered to be so cool and calm. Their role is the trickster, imparting lessons through their pranks, pranks that can be far from pleasant in such a violent race as the Garou. Just as important is their ability to act as a voice of dissent or devil's advocate with far less fear of punishment than the Garou of other Auspices. In a society as traditional and conservative as that of the Garou Nation, a free-thinking individual with the right to speak his or her mind is absolutely important, whether to encourage change or to reaffirm the current position through the challenges he or she provides.

Those of the new moon are often skilled scouts or assassins, as the "hidden moon" is associated with stealth and secrecy. Within a pack, a Ragabash's duty is to to provide a contrasting view, and also to help their packmates find their quarry, or to elude their pursuers. They may also use humor to lighten the mood or break up arguments, often acting as an "omega" to turn hostilities toward themselves.

Ragabash are a special case in that they are not associated with any one form of Renown, and may rise in Rank through any combination of the three types; however, they require more Renown overall to rise in Rank, and find it more difficult to gain Renown at all. Other Garou expect the worst of the tricksters, and are likely to assume that some of their accomplishments were performed for some ulterior motive. They are not particularly associated with any sept positions - for who would trust a trickster with such responsibility? They may serve a purpose during a moot, for some rely on a fool to challenge the traditions of the sept at key points during the moot so that the rest of the sept may be united in refuting them (or perhaps enlightened if the fool's dissent strikes a chord).

Ragabash of the waxing moon (that is, the day after the new moon) are said to be more cheerful and light-hearted than their brethren and are more apt to use humor. Those of the waning moon (24 hours before the new moon) are supposedly a darker sort, more obsessed with the shadows, secrets, and doom. They are also said to pull ruthless, vicious pranks and use a more biting sense of humor. 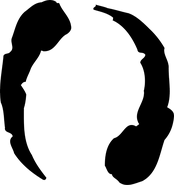 For more information on the other Auspices of the Garou, you might also check:

Retrieved from "https://whitewolf.fandom.com/wiki/Ragabash?oldid=234059"
Community content is available under CC-BY-SA unless otherwise noted.