Rafael de Corazon is one of the founders of the Camarilla and the most fervent defender of the Masquerade. He wields considerable influence and is rumored to be a part of the Inner Circle.

Born in Spain during the struggles between Christians and Muslims, the young Rafael was taken by the Church to become an altar boy. Using his influence on the local bishop to strike back at envious rivals, this tool went missing when the bishop's attention drifted off to other boys. Desperate, he begged to be allowed as a priest, but showed little talent for it.

To advance his power within the clergy, he sought stewardship over high-profile projects. He lost many plum positions, like supervising new cathedral construction, but eventually won a lesser assignment overseeing the creation of cathedral mosaics and illuminated manuscripts. When this did not work, he made his artisans devise sexually explicit illustrated manuscripts. The bishop loved the new works, and Rafael gloated over his renewed status within the cathedral.

The bishop had planned to convert a native pagan witch, Callisti y Castillo, with the use of the finest arts. When she came at midnight, the bishop browbeat the priests into making a great show of hospitality. He presented Callisti with gifts of mosaics, stained glass and their most exquisitely painted Bible. But she found them all wanting, and rejected conversion. Only a piece of Rafael's monks won her approval and she converted, donating a remarkable sum to the Reconquista.

Callisti asked to bishop for permission to take the talented young priest with her. He refused the unseemly request, saying it was not part of their original agreement. However, upon seeing Rafael grow pale and wan over the following days, he relented and let her take him. The bishop did not know that Callisti was a powerful vampire of the Toreador clan, and had drained Rafael's blood every night in his sleep. Once Rafael was hers, Callisti Embraced him, turning him into her childe.

He was shocked at the sudden reversal of his fortunes, but could do nothing to resist. She demanded he paint more erotic art for her. The art he produced was mediocre at best and, when he admitted his deception, she flew into a rage and nearly destroyed him. As his precious blood drained away for the second time, he begged for his undead existence. He insisted that his deception showed a special kind of artistic talent, and that his very life was a work of art. Amused by his appeal, she spared him, leaving him in a society of jealous young Toreador with no respect for him.

When the Inquisition flared up, Callisti wanted no part of the war against the mortals. She had grown weary of Christian art, finding it increasingly arid and lifeless. Rafael volunteered to run her affairs while she was on her travels, and she consented with little interest or enthusiasm. Using his sire's influence, Rafael amassed power, using her authority to propose treaties, form alliances, and launch territorial fights. He created numerous childer while hiding behind Callisti's authority.

Rafael's mediocre artistic talents gave him little status in the Toreador, so he became a great patron of the arts. He knew the talented Toreador did not respect him, so he covertly used his power to damage and embarrass them.

As the situation of the Burning Times had grown dire, de Corazon used his sire's authority to address the elders directly during the first meetings. Reminding them of the Sixth Tradition (the Masquerade) that they had so often breached, he accused them of being responsible for the current situation.

His impassioned speech reached even the closed minds of the Ventrue and Tremere elders. He turned the tide of thought from a craving for all-out war with the mortals to subtlety and subversion. The vampires went underground and covered their traces. They covertly changed the intellectual climate. Their human agents mocked eyewitness accounts of vampires and ridiculed the old legends. The vampires survived the Inquisition, and within several generations, humanity turned to science and scoffed at superstition.

Though he is not the oldest, most powerful, or most talented of the Toreador, Rafael is the most influential. He won the hearts and minds of his clan during the Inquisition, and has not released his hold on Toreador thinking since. But while he rides high on the respect of others, he lives in terror of the return of his sire, Callisti. He fears her anger over his abuse of her power.

There is a rumor that de Corazon had Vykos' penis framed after the Tzimisce threw it at Hardestadt during the Convention of Thorns.[2]

Gorgeous beyond belief, Rafael has a mellifluous voice to match his looks. Witty and eloquent, de Corazon is credited with being the originator of the Masquerade. He uses his looks to sway others to his point of view. His main flaw is his desire to always be the most beautiful person or thing in any setting. Medium boned and of average stature, de Corazon is beautiful in a way that seems almost angelic. He wears the garb of the Spanish conquerors, a fiery peacock amidst the drabness of his fellow Founders. 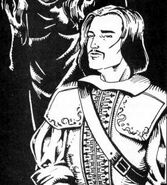 Rafael, as depicted by the Giovanni Chronicles.

Retrieved from "https://whitewolf.fandom.com/wiki/Rafael_de_Corazon?oldid=229772"
Community content is available under CC-BY-SA unless otherwise noted.