Assamite Sorcerers, Assamite Viziers
Quietus is the signature Discipline of the Assamites that grants them influence over the blood of others.

Though each of the Assamite castes possesses Quietus as an in-clan Discipline, it is primarily known for being an assassin's tool in the hands of the Warrior caste, and the lower level powers are largely geared towards that end. Developed by the Assamite Antediluvian, Haqim, in ages past, its use by his descendants is associated with passing judgment on Cainites and protecting mortals from their depredations.

One strange side effect of such power over blood, however, is that it seems to leave bloodlines with an affinity for Quietus vulnerable to blood curses. Also, blood diseases spread more quickly among users of Quietus.[1] Advanced users are known to develop blood fetishisms thanks to the focus of the Discipline on blood.[2]

Included below are the official powers described in supplements for Vampire: The Masquerade and Dark Ages: Vampire. Sources are described below in the order they were printed. In the case the alternate system detailed below is used, these are the abilities of the Warrior Caste.

V20 and V20 Dark Ages introduce an alternate system that splits Quietus according to Caste. The powers described above are the abilities of the Warrior Caste, while the Sorcerer and Vizier Castes have their own ways to utilize Quietus. Every Assamite can learn every application of Quietus, but those that come natural to his Caste are those that are most easily learned.

According to this version, the Clan referred to the Discipline as a whole as Abed Dume, a phoenician term meaning "destroy blood". The applications used by the Warrior Caste were referred to as Hikmat Dume ("blood wisdom"), later latinized as Cruscitus, while those of the Vizier Caste were referred to as Minhit Dume ("blood offering"), later latinized as Hematus. While Assamites can learn each application regardless of caste, both the Cruscitus and Hematus are more common in their respective castes.[3] The Sorcerer Caste variant does not have a separate name. 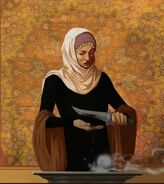 Blood of the Cobra. Art by William O'Connor

Condemn the Sins of the Father. Art by Veronica Jones