The Lioness of Jerusalem

Qawiyya el-Ghaduba, the Lioness of Jerusalem, was the last childe of Samiel and the only owner of a copy of the Code of Samiel.

Clan legends tell that Qawiyya was the last survivor of a demonic plague that had decimated her village. Despite this, she stayed, resolute in her faith that a single soul could make a difference. When Samiel on his last march to Chorazin met her, he became enthralled with her resolute faith and gave her the Embrace, along with the only copy of the Code of Samiel.

During the brutal campaign of the Tremere, Qawiyya managed to make the Holy Land a somewhat safe haven for her kind. The Diet of Olives established a hegemony between the princes of the Middle East that aided her Clan to avoid total extermination. Her future fate is not known, but given the general fate of the Salubri, it is likely that she met her end by the hands of the Tremere.

Although few of Saulot's line remain, those who still remember know that his favorite childe was Samiel, who single-handedly launched a divergent warrior's path from within the clan of healers; who founded the Code that bears his name, and who was killed by the same monstrosities he swore to destroy.

Before leaving to face the Baali in their unholy sepulcher, the infernal acropolis at Chorazin, Samiel called those of his line together and warned them of dark times to come, and urged them each to remember the Code as he had instructed it. It would be his last known appearance.

What few know is that Samiel made a single stop on his way to Chorazin – a stop that would change the Warrior Caste for all time. Samiel found himself drawn by a vision to a small village. The townspeople had fallen under a terrible plague. Those who remained had lost all hope and abandoned their homes and their unburied love ones – all but a single soul. Samiel found a lone Arab woman single-handedly moving the corpses of her infant son, her two brothers, and her dead husband out to a pyre and watched those closest to her vanish in flame.

Enthralled, the warrior asked the woman why she alone chose to stay, when everyone else moved on. She simply replied it was her duty that the dead be buried. She knew the source of the plague was the Devil, but so long as a single soul stayed and tended to the dead with the same unshakable faith she tended to the living, then the Devil could never truly claim the town as his own. Lucifer would be foiled by one woman of faith.

Now Samiel, the greatest warrior of the Salubri, was shaken. He recognized God's work before him. He had been guided to this woman and knew his journey to Chorazin would be his last. Knowing this, Samiel entrusted the woman with two great responsibilities: first, he Embraced her into the warrior line, making her the heir of his legacy. Second, he gave her his first-hand copy of the Code of Samiel, penned by himself centuries ago. This was hers to protect... and to remember.

Six hundred years later, the last childe of Samiel returned to Jerusalem after she had seen both her sire and her sire's sire destroyed. She launched a campaign of brutal justice against the Tremere, raging through the Holy City like the wrath of God, laying waste to the Tremere. Before the year's end, she had removed them from the city and put a plan into action to keep them out of Palestine forever.

She set up shop in the old Tremere chantry, where she invited all the neighboring princes. After a week of deliberations, an accord uniting the region. A new era of peace and determination began in Palestine. Although Qawiyya held no title, there was no doubt among its residents who held the reins of power and righteousness in the Holy City. This Muslim warrior Salubri became known as the "Lioness of Jerusalem".

An aged Salubri healer named Nahum ben Enosh assisted her early efforts before passing the torch and slipping into torpor. He was laid to rest in a crypt he designed and Qawiyya watched over him as vigilantly as she protected her copy of the Code of Samiel.

Qawiyya's account seems to contradict the widespread tale about Uriel being the one who found the Samiel's writings which would become the Warrior's Code. 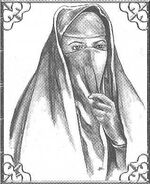 From Road of Heaven

Retrieved from "https://whitewolf.fandom.com/wiki/Qawiyya_el-Ghaduba?oldid=229791"
Community content is available under CC-BY-SA unless otherwise noted.