Khan of the Livonian Ferals
Qarakh was a Gangrel warlord and signature character of his clan during the Dark Ages. Among others, he diablerized the Ventrue methuselah Alexander of Paris.

Qarakh and his sire, Aajav, lived and hunted among the Mongols, but were driven to the west by the Anda. Aajav went into torpor and Qarakh became the "Khan" of a band of Ferals in Livonia. Some time later, Qarakh's tribe made an alliance with the Telyavelic Tremere, and the Gangrel warlord took the Tremere Deverra as his counselor and lover.

In the 1230s, the Ferals of Livonia were challenged by the Ventrue methuselah Alexander. Qarakh reluctantly committed diablerie on Aajav, who wanted to die, and therefore offered his strength to his "brother" so that their combined might could pose a chance against the methuselah. After this diablerie Qarakh even manifested some of the Anda abilities (coming out of earth-melding with his warhorse in the beginning of a battle).

Ironically, not even Qarakh's new found powers proved a match for Alexander. The ancient still was too strong and too fast, but the Telyavelic Tremere had a card up their sleeve. They managed to assert a pact between Qarakh and the pagan smith-god Telyavel, who infused Qarakh's body with the power of the land itself for as long as he remained in contact with the soil of Livonia.

As a side effect of such tremendous power, Qarakh would be bound to the land, unable to leave Livonia except for short lengths of time, and no matter how many centuries he would live, he should always be forced to return in order to replenish his strength, or else he would grow weaker until the Final Death. According to the smith-god, this condition would last so long as his bond with Deverra did.

Having no other real option, Qarakh accepted the pagan god's help, and with the power of Telyavel he matched Alexander's speed and strength, while his sharpened warrior skills gave the edge necessary to win the night. He defeated and diablerized Alexander. Soon after the battle, the Ventrue ancilla Lord Jürgen von Verden was sent by lord Hardestadt with an offer of peace, and the pair negotiated a truce between the Ventrue and his tribe.

It is strongly implied that Qarakh would go on to be known as Jalan-Aajav in the modern nights. Both characters are elder Gangrel who rode with the Mongols, both share a similar temperament, and Qarakh's sire (especially post-diablerie) may have provided the inspiration for the name Jalan-Aajav. It has also been implied that Jalan-Aajav may in fact be the same person as Karsh, and the names Karsh and Qarakh could plausibly share a linguistic origin, although Karsh's history as written (if true) is incompatible with the biographies of both Qarakh and Jalan-Aajav. 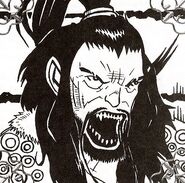 Retrieved from "https://whitewolf.fandom.com/wiki/Qarakh?oldid=275418"
Community content is available under CC-BY-SA unless otherwise noted.