Qadir al-Asmai was the Toreador sheriff of New York City, and one of the aspirants to the position of Prince.

In his mortal days, Qadir was raised in occupied India as a loyal citizen of the British empire. Living in a servant family of relative comfort, he soon came into contact with the ruling Cainites of Britain, among them the Toreador. One of them ghouled him to further contacts between locals and occupiers, and eventually, Qadir earned himself the Embrace after ending a riot by nearby rebels. When India rebelled, Qadir was forced to fight his own countrymen and left for London afterward.

However, he did not find the city to his liking and was conflicted about his decision to slay the rebels. He met with Justicar Don Cerro, who eased his conscience and took him as an Archon, until Qadir emigrated into the USA to start anew. Serving various princes as enforcer and earning quite a reputation as a paragon of duty and effectiveness, he was called for the war effort in New York. Despite thoughts of settling down, he nonetheless accepted the position of sheriff under Calebros and was quite disappointed with him when the Nosferatu decided to step down.

As his humanity dwindled in the years of service as a sheriff, Qadir was relieved to hear when Theo Bell encouraged him to become Prince. As for now, he did not involved himself as much as other candidates into the struggle, believing that he could step down at any time and settle in his own domain somewhere else. 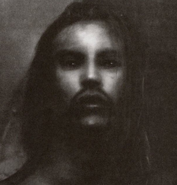 Qadir in New York by Night

Retrieved from "https://whitewolf.fandom.com/wiki/Qadir_al-Asmai?oldid=229732"
Community content is available under CC-BY-SA unless otherwise noted.