The Promise of 1528 was the treaty between the Camarilla and the Giovanni that formally accepted the Giovanni as the successors of the Cappadocians. It was given by the Founders and Claudius Giovanni, officially ending the feud between them that had silently festered since the Conspiracy of Isaac.

The Promise included the assurance of non-interference of both Giovanni and Camarilla into each other's affairs. It also granted the Giovanni authority over the city of Venice, although the Inner Circle claimed the right to hold their annual meetings there.

In the 2010s, rumors began circulating that the Promise had a 500-year time limit, placing the moment worryingly close to its presumably end in 2028. While there has been no direct confirmation of this time limit, it is considered to be a precipitating factor in the Family Reunion of the Cappadocian bloodlines, and a justification for the founding of Clan Hecata in anticipation of possible war. 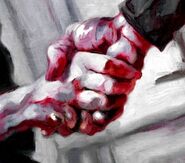