Premascine
Pochtli was the head of the Pisanob branch of the Giovanni family and a fervent enemy of Sabbat control in South America. He was rumored to be a Premascine and a survivor of clan Cappadocian, but no concrete proof exists. Pochtli was hideously ugly and never left his temple sanctuary, instead relying on a network of spies and servants known collectively as the camazotz.

As the progenitor of the Pisanob, some say Pochtli resembled the fanged and feathered gods of Mesoamerican mythology. Pochtli worked through a network of agents and spies known as the camazotzes, who attend to his needs and do his bidding.

His sanctum was a decrepit Aztec temple in the heart of Mexico. Instead of leaving, he sent his agents to do his bidding. He constantly warred with the Sabbat, who were a never ending threat to the safety of the Mexican people. Pochtli regularly used captured Sabbat members for necromantic and thaumaturgical experiments. The Mexican Sabbat greatly feared him, for he was known to steal their souls and trap them forever in unwilling servitude. Numerous attacks against him had failed, as he kept legions of zombies and camazotz ghouls by his side.

Pochtli had made a few recent discoveries reported to the Venetian Giovanni which caused quite a stir. Through his traffic of wraiths and spirits of Mexico, he had discovered information on the shadowy group of Sabbat known as the Harbingers of Skulls, and reported also that there had been of late mass slayings of Tremere antitribu by unknown forces.

Apparently the Harbingers of Skulls had come out of long hiding, but their motives and actions were unknown. Wraiths spoke fearfully of the Harbingers of Skulls, saying that the fire of vengeance surrounds them. Pochtli heard these warnings with grim resolve, and his wraith contacts all agreed on the gravity of these Sabbat Kindred's presence.

The shifting tides of the Sabbat war tolled heavily on Pochtli and his Pisanob Giovanni, once quite numerous, reportedly dwindled by the year. The Giovanni elders reputedly grew concerned over the performance of their "cousin", though no action had yet been taken in the years prior to the Gehenna War.

In the late 2010s, the Harbingers of Skulls mounted attacks on Giovanni holdings, finally bringing the Pisanob to the absolute brink of extinction. In exchange for a cessation of hostilities, Pochtli offered his unlife, which the Harbingers accepted. 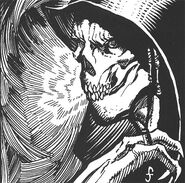