Penny Dreadful, born Penelope Anne Drizkowski, is a mage and signature character of the Hollow Ones.

Penny was a strange child. She never did fit in, as few Hollow Ones did. She clashed with her parents. Mommy was an alcoholic. Daddy played the field. On her 13th birthday, Penny held her first séance at the party. She and five other girls, all in their pajamas, tried to call the spirit of Jim Morrison. He did not answer, but something else did. It scared the hell out of every girl in the room except Penny. From that day forward she walked the edge of Awakening, occasionally drifting across the line but her Avatar seemed set on not waking up. She took up Tarot cards and reading books on witchcraft and the occult and then dabbled for a few years.

At 16, Penny got serious. Tired of being picked on by the kids at school, chubby and unhappy, and suffering from a terrible case of acne, she began to cast spells. She was young and naive and did not fully understand what she was doing. People got hurt. She got her revenge. It is a good thing she was only dabbling.

That little bit of magick in her, though, was enough for her familiar to sniff her out. One day, a black cat showed up on her window. Penny had just turned 18 and left home to live on her own in a basement studio apartment. It smelled of wet dog (the apartment, not the cat) but she could not have been more proud. The cat, though, was less than pleased to find HIS mage living in such squalor. Penny fed the cat, though, no matter how little was in her own cupboard for herself. She practiced her witchcraft, dressed the part, and decorated her apartment as if it were a spidery bat cave.

One day, she found an old book in an old bookstore. It had spells in it. One promised a lover. Penny followed the directions and was prepared to cast it when the cat walked on to the book, as cats will do. Like other cats it sat there and looked up at her. Unlike other cats, it then spoke. "You don't want to do that," it said.

Penny slipped over the edge and plunged into the pool of magic she had only barely touched. Her Avatar swelled within her. Since then, she and Mr. Mistoffelees have been inseparable, much to the chagrin of his previous mistress, Jodi Blake. Penny never bothered to cast the love spell.

A decade has passed since then. Shortly after her Awakening, Penny began to frequent a halfway house for Orphans. She met Neville there and he immediately saw something special in her. He took her under his wing and when he built the Waydown Chantry in San Francisco, she helped him. She lives there with the others in their cabal and assists in maintaining it.

Penny dresses most often in black, Victorian gowns that button up to her neck and hang down to her toes. She adds her own style to them, however. She loves corsets and, rather than wearing hers on the inside, she wears them outside her dress. She darkens her eyes with kohl. Her naturally pale skin still bears faint acne scars, but she covers them with milk-colored makeup. Mr. Mistoffelees like to sit on her shoulder, though when out in public he rides around in her old-fashioned doctor's bag.

Penny speaks excellent English and rarely uses slang. She also employs graceful mannerisms that call back to an older time, even though she was born in 1973. This gives her an old-world formality that makes her seem serious and mature. Until someone crosses her, she treats them with friendliness and respect. When she bristles, though, her tongue can be quite sharp, almost to the point of putting Mr. Mistofelees to shame. She does not cuss or call anyone names. Usually her barbs go undetected, unless those listening are smarter than the average bear. 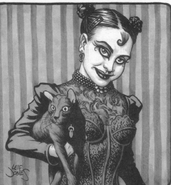 From Tradition Book: Hollow Ones. Art by Christopher Shy

Retrieved from "https://whitewolf.fandom.com/wiki/Penny_Dreadful?oldid=202710"
Community content is available under CC-BY-SA unless otherwise noted.