Okulos is a Nosferatu companion of Beckett, and plays a major role in the novel Gehenna: The Final Night. In the Final Nights, he serves as Beckett's resource for various contacts and information.

In life, Okulos was an antiquarian who was Embraced by an unknown Nosferatu. As a fledgling, he came to disdain the politicking of the undead, and when he was rejected as a sireless thin-blood (implying that his generation must be between the 13th and 14th) by the Camarilla, he became an Autarkis.

In his work, Okulos eschews supernatural aid, instead relying on painstaking research. He managed to establish a working relationship with the Gangrel Beckett, with the two cooperating on numerous researches. Okulos has embraced technological advancement and spent most of his time in haven surrounded by computers, until Beckett convinced him to accompany him to an expedition near the the turn of the century.

Okulos and his childe Korenna traveled with Beckett to the Taurus Mountains in Turkey, where they were on an archeological expedition. They find the cave entrance to Kaymakli, home to thousands of Cappadocians, trapped behind the ward of their Antediluvian Cappadocius. Okulos insists that he and Korenna should go examine the cave mouth, and Beckett acquiesces to his demand. Once near the cave mouth however, they misjudged the location of the barrier and Okulos' childe Korenna suffers Final Death, and Okulos himself somehow becomes trapped inside the barrier, unable to escape.

For the following nights, Beckett continues to visit his trapped comrade and brings him animals to feed on. This continued until Okulos no longer appeared at the barrier, leaving Beckett uncertain to Okulos' fate. Okulos was trapped inside Kaymakli for four years before he was finally rescued.[1]

Released from imprisonment, Okulos was one of Beckett's major allies in his quest to learn more about the Book of the Grave-War, the Shaal Fragment, and the events of the Jyhad in the Final Nights. Okulos compiled much of Beckett's research and distributed it among those vampires that the Gangrel trusted.

Unbeknownst to Beckett, Okulos also acts as an informant to "mrmysterio", an anonymous Kindred with ties to the Inconnu with great interest in Beckett's findings.

In late 2004 or early 2005, Beckett mounts his rescue attempt to save Okulos from Kaymakli. After he breaks the barrier, Beckett explores the abandoned city and eventually finds Okulos. Instead of finding Okulos in torpor, Beckett is forced to fight a Frenzied Okulos when the two meet. After a short bout, Beckett destroys Okulos' hamstrings and incapacitates him. Beckett then meets Kapaneus, and Kapaneus relate that Okulos taught him the English language, and told him much of the outside world, and in turn Kapaneus tried to teach Okulos methods of conserving energy without feeding, but to no success. Beckett then takes both from Kaymakli, and they return to civilization.

A short time later, Okulos has recovered and spoke with Beckett, thanking him for for his rescue. By this point, Okulos had healed his wounds from Beckett and reasserted his humanity over the Beast. From then, Okulos merely assists Beckett with various resources, contacts, and information as Beckett requires it.

At some point after his rescue from Kaymakli, Okulos desired revenge against Beckett. Being trapped inside the Cappadocian city and assailed by the nightmarish dreams drove Okulos insane to a degree. His dreams and memories melded together, and he earnestly believed that Beckett had killed Korenna and trapped him there beyond the barrier purposefully. Okulos wanted to take away any chance of Beckett's learning of the true origins and purpose of the vampire race, the only thing Beckett truly desired.

To achieve this, Okulos began masquerading as a vampire named Samuel. He became advisor to Jenna Cross, the apparent Last Daughter of Eve that was raising a thin-blood army in Los Angeles. After Cross' victory over L.A. Prince Tara, Okulos as Samuel whispered in Cross' ear that soon hunters would be coming to capture or kill her, the worst of which would be Beckett. Okulos took advantage of the thin-blood's attitudes towards elders and true vampires in general, and conditioned Cross to hate Beckett.

Continuing his plan, Okulos obfuscated as Beckett and went to Victoria Ash's haven in Georgia under the guise that "Beckett" wanted to buy back the artifacts he recently sold to Ash. Once alone with Ash, he dropped his disguise and began to attack Ash. Due to the Withering, Ash was unable to fight back or heal, and Okulos killed her in a manner mimicking Beckett's claws, which implicated Beckett as Ash's killer. Okulos then left, and returned to L.A.

Back in L.A., Okulos disguised again as Samuel encountered Smiling Jack, now advisor to Jenna Cross and prophet of Gehenna. Jack confronted him about using Cross to attack Beckett, and prepared to kill Samuel to save Cross from his manipulations. As Jack gets ready to fight, Okulos reveals that he's left a package waiting to be picked up by Camarilla agents in a short time, containing the names, patterns, locations, strengths, weaknesses, etc. of Cross and her thin-bloods. If Jack kills him, the Camarilla would retrieve the package and destroy the thin-blood movement, but if Samuel lives he plans to go retrieve the package to avoid the Camarilla gaining the package. Jack ceases killing Samuel out of his devotion to Cross, the thin-bloods, and Gehenna, tells Okulos that he hopes Beckett will stop him, and turns away. Okulos brandishes a long knife, and kills Smiling Jack.

Okulos continued to manipulate Jenna Cross, to the point where she could barely stand the thought of disappointing or disobeying Samuel. She sent her thin-blood soldiers chasing Beckett around the world at his suggestion, and it wasn't until Beckett devastated an entire team of thin-bloods in Hungary did Cross stop sending her soldiers to their deaths.

Okulos had previously stowed away on Beckett's private jet and traveled with them unknown. He remained hidden for most of Beckett's journey across the world, but revealed himself in Iraq. As Beckett lay recovering in a basement, the Salubri Rayzeel prepared to tell him everything Saulot had taught her about the origins and purpose of vampires. As she began, Rayzeel was suddenly suffered Final Death, and behind her after she turned to ash was Beckett's pilot, Cesare, holding an empty flare gun. Cesare suddenly turned into Samuel, and introduced himself to Beckett. Beckett in rage attacked Samuel, but due to the Withering he was laid flat by three pistol shots, and then Samuel was gone.

Beckett later visited Okulos in Chicago, to visit his old friend. Shortly after his arrival, he confronted Okulos on killing Rayzeel. Beckett claimed it was the flare gun that gave away Okulos deception. While the former feigned ignorance at first, he quickly admitted to the deed, among many others that he did in his quest to take away Beckett's prize. Okulos claimed he had won, that he utterly destroyed Beckett and made him fail, and prepared for Beckett to kill him. Beckett however told Okulos to look at him, and Okulos was horrified to find that Beckett was not a despairing wreck, but rather peaceful and content. Beckett leaves, and tells Okulos that it was in fact he, Beckett, who had won.

Walking out into the night, Beckett met with Kapaneus outside Okulos' apartment building, and Kapaneus revealed he had been masking Beckett's aura with his own, to trick Okulos. Beckett then signals for Jenna Cross and her thin-bloods. Before coming to Chicago, Beckett traveled to California to tell Cross what he'd learned, and that they had both been played by Okulos. Beckett tells Cross Okulos' apartment number, and that he may have a flare gun somewhere in the apartment. Cross leads her coterie to Okulos' apartment, and there they kill Okulos in his despair.

In the Gehenna sourcebook, Okulos appears in a similar fashion as he does in the Gehenna novel. He is still trapped within Kaymakli for the same reasons, only it is the players who find him as they explore the cave. If they rescue him, he provides them with information and resources as the players traverse the Final Nights.

Exploring Kaymakli from Nights of Prophecy. Art by Leif Jones 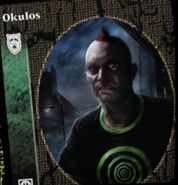