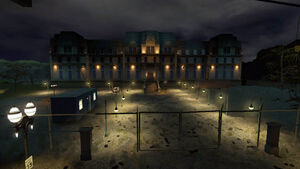 The Ocean View Hotel is a ocean-side hotel in Santa Monica. Recently-renovated, it had previously been known as the Ocean House Hotel, but rumors of haunting had the building sitting long-abandoned for decades. Even after re-opening, visitors report nighttime footsteps, creaking walls, and shattering vases.[1]

The Ocean House Hotel's grand opening was May 30, 1958, and among its first guests was a man named Ed, his wife, and their children Ed Jr. and Tiffany. Ed's mood turns dark and paranoid not long after arrival, and within a week he'd killed his family and set fire to the hotel, where he presumably died as well.

The Hotel remained closed for nearly 50 years, until 2004, when Therese Voerman acquired the property with the intent to renovate and reopen. Several construction crews abandoned their work and refused to return due to continued haunting by the ghosts of Ed and his wife, until Therese acquired the services of Prince LaCroix's latest minion, convincing them to retrieve an item to which the ghost was tied.[2]

By 2005 it had reopened as the "Ocean View Hotel," and noted Kindred researcher Beckett briefly stayed there. The effort to use the item to banish the ghost may have only been partly successful, as signs of haunting evidently continue even after the renovation.

Hotel's entrance
Add a photo to this gallery

Retrieved from "https://whitewolf.fandom.com/wiki/Ocean_View_Hotel?oldid=265320"
Community content is available under CC-BY-SA unless otherwise noted.