The Obertus Revenant line originated over 800 years ago in Constantinople as a ghoul family of scholars and clerics dedicated to an ancient Tzimisce known as the Dracon.

Reclusive scholars, the Obertuses have managed to maintain their continued existence by avoiding the Sabbat’s notice and by feeding their Tzimisce patrons a steady trickle of research data. Originally librarians and clerics for the Tzimisce lords of the Byzantine Empire, the Obertus family moved first to the Clan’s ancestral homelands in Eastern Europe, then to the New World during the first waves of Sabbat colonization. They still maintain a strong presence in the New England states and the eastern Canadian provinces.

The Obertuses can best be characterized as chthonic, both in their reclusive small-town nature and in their constant search for knowledge that they may not necessarily want. Obertus research tends toward the paranormal: ghouls, ghosts, beasts, and other denizens of the night, among other subjects.

Elders among this revenant family have come to believe that revenant existence is the key to the next logical step in human evolution: Homo obertus is destined to replace Homo sapiens, just as modern humans exterminated the Neanderthal. To this end, the family conducts experiments with various permutations on the Embrace and the ghouling process, using vitae from several captured Camarilla Kindred and one Tzimisce elder who was foolish enough to enter voluntary torpor in an Obertus-controlled fishing town outside Boston.

No definite results have appeared yet, but the Obertuses believe they may be close to discovering the secret of perpetuating “ghoul” existence without a source of vampiric vitae.

Weakness: The Obertuses were bred for intellectual ability, sometimes at the expense of stability, and are thus prone to monomania and similar psychological disorders. The vast majority of Obertus revenants suffer from the Obsessive-Compulsive derangement. 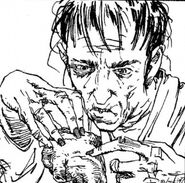 Retrieved from "https://whitewolf.fandom.com/wiki/Obertus?oldid=241489"
Community content is available under CC-BY-SA unless otherwise noted.