Nikanuuranu is an Earthbound of the Neberu. He has formed a pact with the Inconnu's inner circle, the Council of Twelve, to conceal their base from the outside world.

When the Anarch Revolt swept across Kindred society, Cretheus and the Council of Twelve, in a desperate measure for self-preservation, initiated a magical ritual and summoned a demon from the Pit named Nikanuuranu, a former angel of starlight and the firmament. With his True Name, the Council bargained with Nikanuuranu, who promised that he would cast a great incantation over Hunedoara Castle, keeping it hidden of the eyes of the outside world, in return for a mass human sacrifice.

One year after the casting of the incantation, however, Nikanuuranu appeared to Cret, and informed him that his magical trick could not maintain for eternity, but rather was only powerful enough to last the span of one year. Since this time, the Council of Twelve has been bound to perform the rite of sacrifice every year and shed a drop of their own vitae in the pit, in an isolated chamber deep within Hunedoara.

By itself, the demon lacks the power to conceal a castle so completely, but the pact enables it to call upon a far greater occult power - the Curse of Caine, embodied in the twelve pacters. For all practical purposes, the Earthbound, in addition to its demonic lore, possesses eight dots in every vampiric Discipline possessed by one of the twelve, except for Thaumaturgy. However, it can use those powers only to conceal or defend the castle.

The Earthbound also possesses the crucial power to defend the twelve pacters from each other (any attack by one pacter upon another affects the victim as well as the aggressor). On the down side, none of the twelve pacters may leave the castle grounds on pain of breaking the pact. If one of them ever does so, he would have 10 minutes to come back or suffer Final Death.

NOTE: Nikanuuranu cannot reap faith from the Twelve themselves, but benefits tremendously from the Ritual every year, due to the number of mortals present. The pact as it binds the mortals of Hunedoara is its real source of power, not the Twelve.

In the First Edition the demon of Hunedoara was called "Bahomet".[1] 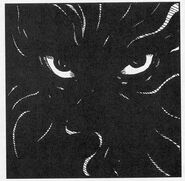 Nikanuuranu, as depicted in Lair of the Hidden

Bahomet, in A World of Darkness

The Pact, from LotH
Add a photo to this gallery

Retrieved from "https://whitewolf.fandom.com/wiki/Nikanuuranu?oldid=229542"
Community content is available under CC-BY-SA unless otherwise noted.