Neville Sinclair Nevermore is perhaps the most famous of all Hollow One mages, as he is the one who gave them their name.

No one knows anything about Neville's Awakening. He keeps it to himself and Anaïs guards his secret well. Some claim to have proof that he was around as long ago as the 15th century. Others have gone so far as to claim they met him that long ago, when he wore a different face and bore a different identity. He himself never confirms nor denies such rumors, though, again, their are those who say that he has let details slip in conversations (purposefully?) about past meetings that he could not have known unless he was there. Whenever Neville comes to visit, the local Orphans have discussion material for days. Who is he? How old is he? What has he seen? Whom does he know? How does he do it? Why?

Neville's semi-recorded history begins at the turn of the 20th century when he formed the first Hollow Cabal. His off-hand comment to Astria Moonshade of the Verbena is legendary among the Hollow Ones. Tying his fate to the fates of others anchored him in the history books. He has remained with and loyal to the members of that first cabal throughout the 20th and into the 21st century. The original members include Anaïs Chevalier, Pietro diGenoa, Josepha de Espronceda, Purity, and Bog Asphodel. Other members have joined more recently, including Baron and Penny Dreadful. They all live in San Francisco. Their chantry is the Waydown, a club hidden away somewhere where only those invited to attend can even find it.

Common knowledge tells us that Neville can transfer his soul and Avatar from one body to another. He does this rarely. After all, it damages his reputation each time he has to rebuild his old image with a new face. Currently, Neville resides in a tall, gaunt, male body. He added the name Nevermore when he took this shell. He wears his hair shoulder length, in an old-fashioned style and dyed black. His preferred mode of dress usually includes suits that would have been more appropriate in the early 1900s.

Neville is a lawyer and talks like one. He carries himself with undeniable superiority, has no patience for trivialities, and does not stand for anyone other than members of his own cabal to contradict him. He will end a conversation and walk away if he does not receive the proper respect. He has a web of contacts on the Hollow Railroad and very little gets past him. He knows people he has never met by name, often just by looking at them because he is heard about them through the Railroad. He has a mind like a steel trap and a memory that rarely fails him. Neville is the father of the Hollow Ones, but he is not a kind father. He trust very few people. He will come to the aid of a Hollower, or anyone else for that matter, if the need is great and the cause worthy of his time. He leads by example. He may show his more human side to his cabal peers, but only under extraordinarily stressful situations will he let his guard down around strangers. He is constantly aware of his legend and tries to maintain it.

Neville is a Master of both Correspondence and Life magics and has the ability to manipulate each of the other Spheres as well. 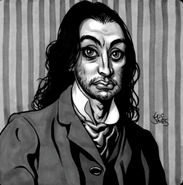 Retrieved from "https://whitewolf.fandom.com/wiki/Neville_Sinclair?oldid=186514"
Community content is available under CC-BY-SA unless otherwise noted.