The Nephandi, Nephandus as singular, are a sect of fallen mages. They are called Naraki by the Euthanatoi. Like the rest of the Traditions, they represent one of the four Avatar Essence; in this case, the Primordial Essence. These mages represent the desire to obliterate the entire Tellurian.

The Nephandi come into existence in two possible ways: firstly, they can be created as the Barrabi from regular mages through the "process" of the caul, or they are simply born with inverted avatars from a previous life, which are called widderslainte. While the Barrabi are the "traitors" of the Ascension War, the widderslainte are a living argument against free will. As unawakened the widderslainte are sociopaths and monsters: an unusually vicious bully, the child who tortures pets or who is the source of all those missing young girls, if and when they awaken the fun really begins.

Even if they do not contact their colleagues the widderslainte are a Nephandi in all but name and tend to spend their time performing atrocities on their own. If they do make contact then you have another bastard to the ranks of hell who was destined to piss on the world from the start. Although on the bright side Barrabi tend to resent the widderslainte so there is always the chance that some backstabbing will occur. Occasionally the other factions will find the budding psycho first and attempt to save them, after all they have not gone through the caul yet. The problem is they do not need to go through the caul, in a sense they have already gone through the caul and any attempts to redeem them are doomed to failure and they will happily drag others down with them.

It is a mistake to compare Nephandi to simple infernalists. Infernalists are those who sell their soul for their own callous purposes – typically power; whether magical, temporal, or sexual. The Nephandi, conversely, willingly corrupt their soul in order to kill the world. In a world full of shades of grey they are the black, each without exception a monster. When a mage Descends, he enters a Caul (a sort of gateway to hell/shrine of unspeakable horror). What occurs within is not generally known as the Nephandi does not discuss it, although things are known to be within the Caul with the Nephandi and many mages do not come out again. If the initiate emerges relatively intact they will have been fundamentally and irreversibly changed; their Avatar will have been inverted focusing on Descent rather than Ascension; their very magic becomes Qlippothic.

There are rumours that the Technocratic Union has been infiltrated by Nephandi. Whether this is true or not remains to be seen.

Though all Nephandi serve Oblivion, they maintain a fairly rigid hierarchy based on power and closeness to Oblivion. This theocratic despotism is prone to constant violent infighting and backstabbing plots at the Lower (greater) levels. the hierarchy is loosely broken into the following categories:

Beyond the Gilledians there are no unifiers of the Nephandi. Though a handful of Aswadim (superhumanly powerful masters of Qlippothic magic) exist, they act (at most) as symbols to the Nephandi, or as avatars of Oblivion. They do not take an active role in leadership.

Although united in their aims the Nephandi are divided in method and master. Although they all strive for the death of the universe how they go about it varies greatly. There are also a large variety of dark gods/demons/horrible dead things for the Nephandi to gain "sponsorship" from. This results in several factions within the group. Although at a casual glance they appear the same a more in-depth study will reveal a great deal of variation. On the bright side this leads to much internal squabbling and backstabbing as the various dark gods play their pawns off against each other and they in turn attempt to boost their masters position. Unfortunately, this also provides ample cover for the minor factions like the festival-minded Goatkids and the technomantic weaponmasters of the Ironhands to exist in obscurity, hiding behind the politics of their "betters."

The most "normal" and "human" of the factions. These Nephandi worship demonic entities (or potentially something pretending to be a demon). The Nephandi Infernalists are different to standard infernalists who sell their soul for their own gain – these guys sell their soul to kill the world (there is also the issue of the exact nature of their masters). They are the most internally organized and socially skilled of the factions, able to pass fairly well within human population. They are also the most human in behaviour and mindset. This makes them all the more dangerous as they are more subtle and insidious than their more insane counterparts as they have more success at infiltration and recruiting. They do not get along well with the Malfeans whose chaotic and primal mindset does not mesh with the formalized ritualistic traditional demon worship.

Not to be mistaken with the Neverborn of Oblivion (although connected in a manner of speaking). These Nephandi worship the Wyrm: the primal force of entropy and corruption. They are somewhat wild and primal in their evil. Often with close ties to the Black Spiral Dancers. The Malfean are often quite insane and zealous in their devotion to the Wyrm. The style of their methods tends to be strongly based on simplistic primal concepts. Their caul process is surprisingly similar as opposed to the other sects, usually they tend to walk the so-called Black Spiral during their inversion. The areas they practice their work in tend to be rotten shit holes of squalor, pollution and filth – it is as though they deliberately pick or corrupt these areas...

The archetype of the Nephandi. The K'llasshaa worship the Outer Lords. Little is known or even possible to understand about their masters, however it is clear that they claim to have ruled this world in the long past, were banished through treachery or fate, and now wish to return. If this is true or not is not known or strictly speaking important, what is certain is that they lay claim to the world and all within it. Whatever the K'llasshaa serves is at least on a philosophical level the most disturbing of the Nephandi, being by far the most alien. Contact with what this sect serves is known to drive the subject completely mad. What is known however is that these beings feed on negative emotions; this in essence leaks into their servants, who are the most bizarre and fortunately, the easiest to track. The K'llasshaa are surprisingly straightforward in their method, usually with minimal dogma and greater emphasis on violence. Their rituals are more akin to a torture session or a snuff film than a mystic ritual (although there is overlap, further confusing the issue).

Most of these new factions remain secrets from all but their own members, a handful of rival Nephandi, and a very small number of outsiders who’ve begin to notice their presence and effects.[1]

Nephandi in Mage The Ascension book

Nephandi in The Book of Madness

Nephandi in The Book of Madness Revised

Nephandi in The Book of the Fallen 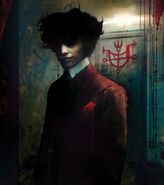 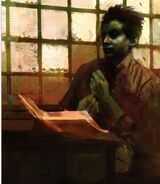