Nathaniel Bordruff is a Nosferatu who dwells in Chicago, harboring only hatred for his curse and the undead in general.

In his life, Nathaniel was a witch-hunter who operated in New Orleans, hunting the spawn of Satan, and killed five Kindred all by himself. This, however, made him arrogant and vain, a trait a Nosferatu exploited to defeat him. In a special form of cruelty, the Nosferatu gave Nathaniel the Embrace, turning him into that what he hated most, and deposited him before his church, the attendants of which fell before Nathaniel's fresh awakened Beast. Nathaniel tried to continue his crusade, but quickly found that the Kindred judiciary had special sentences for people like him and barely escaped Louisiana, hunted by the prince's henchmen.

He continued to wander across the United States, learning to contain his hatred of the undead, but never allowing it to extinguish. After a clash with a Sabbat pack in New York, he ventured to Chicago, where he sided with Lodin in order to crush the Anarch resistance. Lodin introduced him to elder society and primogen Khalid Al-Rashid approached him to gain an ally against the Ventrue's schemes. Nathaniel happily accepted, playing both sides against each other. His rage against his kind led to several "accidents" such as a flood, and after the War of Chicago, Nathaniel hopes to use the power vacuum to ascend to princedom and then break the Masquerade on a wide scale to inform the world of the vampire threat it harbors. 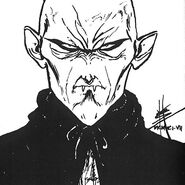 Retrieved from "https://whitewolf.fandom.com/wiki/Nathaniel_Bordruff?oldid=225482"
Community content is available under CC-BY-SA unless otherwise noted.