The Nagaraja are a bizarre bloodline of flesh-eating vampires, feared by Kindred on all sides of the Jyhad.

They descend from mages of the Chakravanti Tradition who sought to create their own brood of vampires by experimenting with vampire blood. Regarded as foolish by their mortal mage contemporaries, the Idran faction of Chakravanti actually managed to turn some of their members into vampires without having them directly Embraced.

The Idran's manipulation of vampire blood, combined with their innate magical natures, produced the bloodline of cannibals known today as the Nagaraja. They are feared necromancers and servants of the Tal'Mahe'Ra, the "True Black Hand".

The Nagaraja are unlike other Kindred in that they must consume flesh, making them among the most reviled and "unnatural" of the bloodlines. They have pointed, irregular teeth, rather than the usual retractable fangs. This means that they seldom smile, and they tend to speak quietly around mortals – unless they plan to eat them.

Similar to the Tremere, the Nagaraja originated in a magical tradition, the Chakravanti. The Idran were originally one of the Chakravanti cults that fought during the Himalayan War, perhaps the greatest necromancers among them. Seeking victory over their enemies, they sought the enlightenment of deathlessness beyond death, following legends of true immortals. Their quest took them to Egypt, where they met the immortal Inauhaten, who offered them the secrets of the Spell of Life in return for sharing his duty as guardian of Enoch. The Idran accepted the bargain, Inauhaten giving them the spell, but they found that for whatever reason they could not fully comprehend it, so they combined parts of the spell with their own magicks to create their own version, which allowed some of them to become undead sorcerers of tremendous power. To commemorate the sacred trust Inauhaten had given them, the Idran gave their group another name: the Tal'Mahe'Ra.

However, the assistance of the liches was insufficient against the forces of the Followers of Set, who sought Enoch that they might exalt their Antediluvian and bring on an eternal night. Reluctantly, the Idran involved themselves in vampiric politics for assistance, but discovered that new vampiric enemies awaited them. They needed to create their own brood of vampires to fight their foes, fighting fire with fire.

The Idran collected blood from their Setite enemies, and called upon their gods to destroy all its impurities, save for the curse of vampirism. Some of the mortal Idran then cut their own throats and sank themselves in the blood, arising as the first Nagaraja. However, the purification of the blood could not erase the karma of choosing vampirism, and so they arose with a hunger for human flesh.

In 450 CE, the War of the Betrayers split the Tal'Mahe'Ra into Eastern and Western Hands, both groups pursuing their own agendas for over a millennium, resulting in generations of Nagaraja being raised without hearing of the Tal'Mahe'Ra or visiting Enoch.

Lacking organization, the dangers of travel during the time, and the multitude of enemies (mages of both the Chakravanti and the Akashic Brotherhood, Kuei-jin, Eastern Kindred, the restless dead, etc.), the bloodline dispersed, with only those affiliated with the True Black Hand being known at all.

Around 1600 CE, the Third Great Maelstrom hit Enoch and destroyed most of the Nagaraja that remained there. The few remaining ones desperately tried to reach the dead city again, but often fell into traps by their many enemies that had installed false necropoli to lure them out. Numerous Nagaraja degenerated and only lived for their own base desires and continued to do so even after Enoch was rediscovered. An agreement between these outcasts and the Tal'Mahe'Ra was struck: the outcasts would tell their childer about Enoch and the purpose for which the bloodline had been created and allow them to join the sect, and the Tal'Mahe'Ra would leave them alone.

Until a catastrophic war with the denizens of the Underworld destroyed the sect to which they belonged, the Nagaraja congregated in the lands of the dead. Since being driven forcibly from that realm, however, the few remaining Nagaraja have made their own fates, leaving their minimal organization behind. A group of them fled to Korea and was granted protection by the Green Court, provided that they would never sire. Still, a few dozen Nagaraja persist, gathering the unholy secrets of death sorcery and creeping among the periphery of vampire society.

Despite their lack of Cappadocian heritage in common with the rest of its bloodlines, a handful of displaced Nagaraja showed up to the Family Reunion and joined Clan Hecata in order to ply their skills and experience in both necromancy and murder; although the broader extent of their involvement in the clan remains an enigma to many from without the bloodline.

Hecata Nagaraja have been affected by mysterious clan-wide changes in the blood affecting their banes, freeing them from their hereditary need to seek sustenance from human flesh.

Curiously, and although it is not widely known, the Nagaraja and Hecata are immune to the Beckoning.

There is a principle divide between those Nagaraja sworn to the True Black Hand and those that chose to remain outside. The Nagaraja within the Shadowlands often follow elaborate Paths of Enlightenment that allow them to feast on flesh without degeneration, while those that remain free of the sect are often more feral by virtue of Humanity loss.

Created to fight the Followers of Set, the Nagaraja feel an inherent antipathy to them and their derivative bloodlines. They are compelled to attack them and although some have enough self-control to contain their hate, tensions are always high.

They are masters of Necromancy – an art inherited from the Chakravanti and augmented by the mummy Inauhaten. The Nagaraja engage in many strange and terrible Thaumaturgical and necromantic experiments. The old Idran renamed themselves Nagaraja – the Serpent Princes[1] – in anticipation of the ultimate enlightenment they would find once they had left life and death behind.

The Nagaraja refer to the flesh they consume as "viscus", in a similar manner to how other vampires call blood "vitae". They regard it as a transubstantiation, a complex ritual of consuming part of one's soul through the physical shell holding it within. They also claim that the hunger for flesh is a result of their separation from Enoch, but those that dwell there find that this is a fancy lie to lure more of the bloodline back.

Most of the mortals who are chosen already have an intense interest in the study of death, but not in causing death for themselves or others.

The majority of Nagaraja are well-educated and many have some medical knowledge (either from their mortal lives or acquired post-Embrace). The bloodline's small numbers make further assertions difficult to support. Some Nagaraja were priests or cultists before the Embrace, some antiquarians, and some exorcists or ghost-hunters. The chosen are often middle-aged, though some prefer Embracing even older mortals.

They must eat raw human flesh as well as drink blood. The corpses must be fresh, and the Nagaraja often knows rituals that preserve corpses for weeks or longer. For each night they do not partake of fresh, raw, human flesh (be it from living or dead source), they lose one die from rolls involving their Physical Attributes. Consuming one Blood Point worth of flesh restores one die to the pool. An average human body has 10 Blood Points worth of flesh, and each point taken from a living victim inflicts 1 wound level.

The flesh the Nagaraja consume must be relatively fresh, though not necessarily alive. Indeed, some Nagaraja keep stores of ritually preserved corpses in their havens. This weakness does not allow them to eat regular food or consume other liquids.

Nagaraja in Clan Hecata are no longer obligate flesh eaters; however, they now share the same curse as their new parent clan: the agonizingly painful Kiss. If necessary or desired, the Organovore (

) flaw may be taken to stand in for the old weakness.

Until a catastrophic war with the denizens of the Underworld destroyed the True Black Hand, the Nagaraja congregated in the lands of the dead. Since being driven forcibly from that realm, however, the few remaining Nagaraja have made their own fates, leaving their minimal organization behind. A cabal of Nagaraja is reputed to have sought protection among the Cathayans of Korea, but this small group is suspected to be an anomaly.

Ultimately, the Nagaraja are too few to have an extensive bloodline structure and exist instead as isolated, freakish loners when they can be found at all. They rarely even meet with others of their kind, as they hoard their precious secrets from everyone, including others of their clan.

Around 1242 CE, the bloodline was divided into two large groups; the Shravaka ("listeners"), recently Embraced vampires that acted as the agents of mentors, the Acarya ("exemplars"), whose primary goal was to strengthen the bloodline's position amidst the Tal'Mahe'Ra.

As a member of Clan Hecata, a Nagaraja can purchase the following abilities:

In pre-Gehenna sourcebooks, the Nagaraja were found entirely within the Manus Nigrum, and with its extermination in Revised Edition, the members of the bloodline were either wiped out or seeking sanctuary within the Green Court.

In 20th Anniversary Edition, the Nagaraja are mostly independent, supporting themselves in Camarilla and Sabbat cities by removing troublesome wraiths. Rather than the exclusively Indian flavor as the bloodline was originally published, the newer V20 book gives the bloodline as a whole more of a Southwest Asian / North African background tied more closely to Enoch than to India.

The Black Hand: A Guide to the Tal'Mahe'Ra is based on the assumption that the Manus Nigrum still exists, never having gone to war with the residents of the Underworld, and thus features Nagaraja as members of the sect. The majority of the bloodline belongs to the sect, though some are independent. Lore of the Bloodlines expands on these independents and their differences from those in service to the Manus Nigrum.

In Vampire: The Masquerade 5th Edition, Nagaraja have the default Hecata discipline spread of Auspex, Fortitude, and Oblivion. A Storyteller may substitute Fortitude with Dominate at their own discretion, or give Nagaraja players the option of purchasing of an exclusive 4-dot Merit to open it as an extra in-clan Discipline.

The greatest fear is the fear of the unknown - fear of death. You know not from whence you came, but I, my friend, know where you will be going, for I have been there. I could take you there, but you would not like what you would find. Your fate is inevitable, but serve my interests, and I will protect you from it for as long as I can.

From Dirty Secrets of the Black Hand. Art by Jason Felix

From VTDA20. Art by Cathy Wilkins

From Lore of the Bloodlines. Art by Mark Kelly 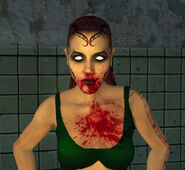 Pisha in the video game Vampire: The Masquerade - Bloodlines