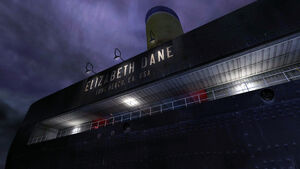 The NZ Elizabeth Dane is a cargo vessel operated by EEP Shipping, whose home port is in Long Beach. In late 2004, the Dane carried the Ankaran Sarcophagus, a separate key, and a collection of pottery from Turkey to Los Angeles.

It was in transit by October 10, and things initially seemed normal, but several of the crew had gone missing by October 17. More and more crew were reported missing, with only pools of blood left behind, leading back to the Sarcophagus. The final report from the captain was on October 20, and apparently none of the crew survived. The Dane may have been on autopilot, as it was discovered and towed offshore just a few days later for investigation by the LAPD, USCG, NCIS, and LAHP.

When the ship was investigated, the crate containing the key was already missing. At least one of the investigating officers suggested some bunny-shaped graffiti indicated the possible presence of a gang.

Professor Ingvar Johansen evidently did not travel on the Dane, but took a different route to LA, as he arrived at the Empire Arms Hotel without incident.