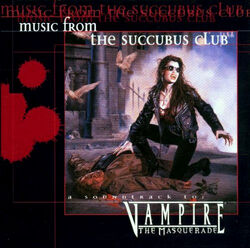 Music from the Succubus Club is an audio CD that was released by Dancing Ferret Discs on March 20, 2000 as a soundtrack for Vampire: The Masquerade. Each of the album's thirteen tracks corresponds to one of the thirteen clans in Vampire. The album's cover art reuses the Clyde Caldwell illustration from the cover of the Vampire Players Guide Second Edition.

The in-universe conceit of the album is that it was compiled by DJ Damascus, a DJ at the Succubus Club. According to his liner notes, each of the thirteen tracks has a particular resonance with the clan indicated next to the track. The correspondence is inferred from the themes and lyrics of the songs, not the names of the bands that recorded them. (In other words, it's not a mistake that the song recorded by the band Nosferatu isn't the song that corresponds to the Nosferatu clan.)

Retrieved from "https://whitewolf.fandom.com/wiki/Music_from_the_Succubus_Club?oldid=243825"
Community content is available under CC-BY-SA unless otherwise noted.