White Wolf Wiki
Register
Don't have an account?
Sign In
Advertisement
in: Mummy: The Curse, Chronicles of Darkness, Games 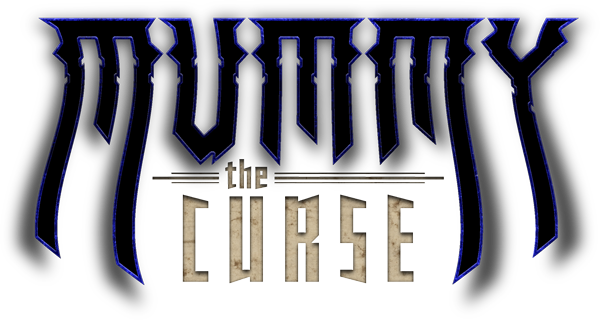 Mummy: The Curse is the eighth major supernatural game for the Chronicles of Darkness (the "New World of Darkness"), and the fifth 'limited cycle' game, with a corebook and three supplements initially planned. Four more supplements, plus a fiction anthology and novel, were added during a Kickstarter for a deluxe version of the corebook.

Mummy's developer was C. A. Suleiman, who was also the developed the supplements for Mummy: The Resurrection, a similar game line for the Classic World of Darkness. More on development can be seen at the Mummy development blog. A Second Edition was published in 2021.

The Arisen, the protagonists of the game, are a particular type of mummy: humans who were subjects of the greatest magic ever worked by mortal hands, the Rite of Return, in the long-lost Nameless Empire. As part of the Rite, they underwent ritual death, and their souls were eternally bound to their mortal remains. Consequently, while the Arisen can be killed, they will always return, their bodies reforming anew.

As part of the Rite of Return, when the Arisen-to-be stood before their final Judge of Duat, confronting the Judge's accusations and scourges, they made a declaration, a summation of their being that emphasised one part of their fivefold soul. Such a declaration is known as a Decree, and it determines both the Arisen's general outlook and the part of their soul, the Pillar, they are most attuned to.

In the Nameless Empire, there were six organizations that held sway over the land, under the rulership of the Shan'iatu sorcerer-priests. Today, five of these continue as the five guilds the Arisen belong to, half-remembered adaptations of these ancient groups.

As undying creatures drawn to power and relying on mortal servants to enact their plans while they sleep for centuries, it is unsurprising that the Arisen have many enemies.

Though they share a common origin, the Arisen do not always work well together. Rivalries are common and deep, between Guilds, among Guild members, and for personal reasons which span millennia. There are also those mummies which have abandoned their duty to Duat and try to destroy the plans of those who still faithfully serve the Judges. Most cryptic of all, however, is the legendary sixth Guild known as the Deceived. These vengeful mummies committed some crime near the end of the Nameless Empire and were destroyed for it, only to somehow survive to this day and seek revenge on the other Guilds.

Some mortals know about the existence of the Arisen and are moved to work against them as much as they can. Mummies are forever plagued by graverobbers who plunder their treasures while they sleep and scholars who lust for their secrets. They are tracked by hunters who try to stop their machinations and even by rogue cults, worshipping the Amkhat or wandering after the loss of their Arisen leaders.

There is also the threat of Last Dynasty International, a corporation with enough knowledge of Iremite magic to exploit it for their own purposes. They know of the resources in the possession of the Arisen and want to use them to make money.

Sometimes servants and sometimes enemies, the Lifeless are less-perfect undead creatures than the Arisen. They include creations of the mummies through secrets of the Guilds and mistaken byproducts of the Rite of Return.

The Arisen are not dead, but they are closer to the Underworld than most, including the more numerous undead vampires. Like the Sin-Eaters, they can call on and utilize ghosts through their anchors. The ghosts of those who willingly sacrificed themselves for the Arisen are called the Blessed, and they may still serve the undying faithfully. Other ghosts, known as the Restless, can still be forced to serve through the use of Affinities and Utterances.