Morganna is a Seelie Sidhe, presumably Wilder, of House Gwydion and ruler of the Kingdom of the White Sands.

No Concordian monarch except, perhaps, King David, inspires the love and adoration of the subjects like Queen Morganna. Morganna is the quintessential wise and benevolent sidhe noble. She is also a strong Romanticist (a Cerenaic). The pursuit of pleasure is a major part of her court's function, but she is no idle hedonist. Pleasure in all its forms is a way toward enlightenment among many in her court. Artists, Romanticists, all manners of spiritual seekers (and no few degenerates) visit her court at Caer Flamingo. There are even a few Cult of Ecstasy mages among the palace's complement. Few stay long, however. The spiritual demands of the court are too rigorous for most hedonists, who prefer their pleasure without strings attached. Morganna uses sensuality as a means of empowerment and is one of Concordia's most energetic and progressive leaders. Her beauty and her political acumen are legendary, even among the sidhe.

The Queen of White Sands is not the most archetypal sidhe to wear the mantle of House Gwydion, but she is among the most beloved. Some conservative Gwydion fae attribute her hedonism to a bastard streak of Fiona blood (conveniently ignoring the often Epicurean tastes of the sidhe of all houses). However, Morganna's love for her subjects is as much as the house could ask for, and even her most celebrated frolics have a reverent tone to them. She is still a Falcon at heart. 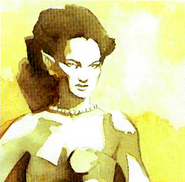 Retrieved from "https://whitewolf.fandom.com/wiki/Morganna_(CTD)?oldid=203854"
Community content is available under CC-BY-SA unless otherwise noted.