The Morganed are a French sub-kith of the Merfolk in Changeling: The Dreaming.

Once, sailors plied the waves on small, wooden boats, knowing there was a good chance they would never see home again. The sea called to them; its beauty and mystery irresistible. The Morganed were born of the dreams of everyone who looked at the see with longing, desperate to know what lies beyond the horizon or what hides in the shadowy depths.

Humans forgot their reverence for the ocean and fouled what they once treasured. Plastic chokes or starves sea creatures while ocean acidification leaves vast dead zones. With their habitat in peril, the Morganed seek to return respect for the ocean to the inhabitants of the land. Seelie try to reawaken a sense of wonder about the deeps while Unseelie tend to remind people that if the ocean dies the land isn't far behind.

Most inhabit the Kingdom of Tides off the coast of Brittany, and among the sea fairies they are those who are most involved in the mortal world. They devote themselves to their own affairs within their fabulous caves or in their chimerical palaces under the sea. The Morganed have not renounced the ties that bind them to their rulers, the Sidhe, who rule with some circumspection, fearing an uprising that would bring them down as easily as a blow of the sea. On the other hand, the sea is a very demanding lover...

The position of the Kingdom of Tides in France has provided an unexpected political role for the Morganed. Contrary to most other aquatic changelings, they have retained many contacts among the lineages that live on the surface, and it is not uncommon for many to take human form and take advantage of the night to visit the mainland.

Mysterious and unfathomable as the element in which they unfold, the Morganed possess an unpredictable nature. Often melancholy, they are also capable of showing a devastating anger legendary among the other Kithain. Like the tide that advances and retreats eternally, the Morganed can be very stubborn, and their character tends to be tenacious and bitter. On the other hand, they are faithful in their friendship and for that reason they detest traitors and perjurers... They are very respectful with their companions ... but also particularly jealous. Those who risk seducing one of these seductive naiads are exposed to the anger of their peers.

Undisputed owners of the ocean, the Morganed fiercely defend their freedom and do not appreciate mortals too much, whom they consider responsible for all the ills that affect the seas. Often the Unseelie members of this kith do not hesitate to attack the imprudent swimmers to avenge all the sacrileges that humanity has committed over the centuries. Defenders of their environment, are increasingly involved in the affairs of men in regard to the defense of coast and seabed, threatened by tourism and real estate speculation.

When they are among the waves, the Morganed are playful and lascivious. They like to sunbathe, and spend long hours lying on benches on rocks that stick out on the coast, mixed with crabs and seagulls.

Also known as sirens, the Morganed are lithe, graceful creatures that exude sensuality and desire. Their skin glistens from blue to emerald green and their eyes are large, dark orbs split by a vertical pupil. According to his mood changes his skin can vary from jade to blue-gray color, which announces his anger. In the same way their hair can take very varied shades ranging from black to emerald green. Apart from their physical features, the Morganed lack lower limbs, replaced by a flexible and dynamic caudal appendage, which resembles the tritons and mermaids.

They often work as professional divers, oceanographers, marine biologists, Sailors, fishermen, lighthouse keepers, hermits, ecologists, port workers ...or anything that lets them bridge the gap between people and the ocean. 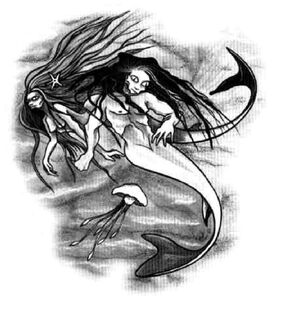 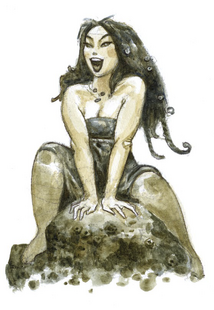