Montgomery Coven, commonly known as Monty, is the Assamite who diablerised the powerful Prince of London, a Ventrue methuselah known as Mithras.

Born as the son of Jamaican immigrants, Monty lived in a Hammersmith ghetto and came soon to despise everyone around him, the whites as well as every other immigrant. He joined gangs as soon as he hit puberty and his ruthlessness quickly ensured his rise to positions of leadership. He enjoyed the freedom of his work and continued until the local Sabbat payed attention to him. The Sabbat was establishing a beachhead in Coven's slum, and the young hoodlum seemed a perfect candidate for the Creation Rites.

Indeed, Monty rose from the earth and assumed a position in a pack, but proved an indifferent Sabbat member. It was not so much that he did not enjoy the power – he did – or that he could not stomach the violence – he most certainly could. It was more the fact that a particularly tepid Vaulderie, combined with Coven's innate cynicism, left him cold to Sabbat ideology, despising the fact that now others told him what to do and when to do it (and not getting caught by humans).

While his pack was in London, Monty stumbled across the severely weakened Prince of the city. Mithras was almost comatose after destroying an entire pack of Lupines moments before, despite awakening from torpor only a few hours ago. Coven did not hesitate. He hurled himself at the far older vampire and began to drain his vitae. But the vitae was not so much a gift as an invader, and the Monty Coven that heaved itself out of the 3000-year-old ash heap was irrevocably changed. Monty lacked the power to fully consume the soul of a Cainite as puissant as Mithras and the diablerie was incomplete. He now feels the personality of Mithras in his mind and battles with it for control over his body. His Amaranth caused him to drop several generations down to the sixth from the eleventh.

The power of Mithras' blood had washed away the Vaulderie of the Sabbat and left him torn with the ancient personality of the Methuselah in his head. Left to his own devices, Monty now strives to battle all who ever dared to command him, although he must battle for control over his own body, as the ancient soul of Mithras is not devoured so easy.

By the start of the twenty-first century, the battle over Monty Coven's body seems to have cooled, with Mithras gaining control. The new Montgomery Coven is in many ways greater than the sum of his parts: the original Monty was angry and driven, though relatively weak and without focus, while Mithras had almost godlike powers but suffered from the deadening ennui of millenia. Today Coven has the knowledge, wisdom, and much of the power of a methuselah, but still feels the excitement and raw emotions of the recently Embraced. Though he is quiet and subtle in his actions, the now young methuselah is more active than almost any of his ancient peers. His goal is to reclaim Britain as his own realm, independent of any sect or power. Monty's diablerie of Mithras remains an open secret, known by many but hidden from most.

Monty founded the cybersecurity company Syndexioi to coordinate his efforts. It uses modern technology to blackmail and bankrupt the Ventrue in Britain, who are usually too old to understand the power of technology in banking. Syndexioi also researches the backgrounds and outlook of Kindred on the island, seeking out disaffected Sabbat and Camarilla vampires. Monty is slowly gathering an army that is loyal to him alone.

Coven's main target is Queen Anne of London, his former Seneschal. The bankruptcy of many Ventrue has weakened her powerbase. Coven managed to frame the Tremere Jackson Montcrief for breaking the Masquerade and then released "proof" that he was framed by the Sabbat. Now the Tremere are up in arms and further threatening the fragile peace in her city. Coven knows Anne is a secret diablerist, and has evidence of her actions. When the pieces are correctly placed, he will reveal her abominable breaking of the Sixth Tradition, let the British Camarilla fall into civil war, and retake his domain.

Details of Mithra's diablerie is different in Fall of London. Mithras survived the regular trap that was set for him by Valerius. He was just in time to free de Camden, who quickly retreated into the Shadowlands, the realm of the dead. The methuselah was unfortunately unable to escape the blast himself, but his exceptional powers of Fortitude were enough to prevent his final death. Severely injured, he fled in a frenzy south into Epping Forest, where he sunk into the earth into torpor. Later, by interrogating nearby spirits, de Camden learned that the Ventrue had escaped the scene, and had entered lupine territory, but was uncertain as to his exact location. After the news of Mithras’s demise spread at Court, membership of the various Mithraic cults in the city quickly dwindled. Since his real identity was known to Valerius and his cronies, de Camden dared not attend Court alone. With few allies and resources at his disposal, he was forced to bide his time. 50 years later, a Sabbat pack called the Gatekeepers surfaced in London led by a Harbinger of Skulls named Alcoan. Her interactions with the London’s Shadowlands did not go unnoticed by de Camden, and he sent wraith agents of his own to make an introduction. The two Kindred agreed not to harm each other, and slowly their correspondence led to mutual respect and a beneficial exchange of Necromantic research. Eventually Alcoan and de Camden discussed Mithras and his fate. When de Camden admitted that the methuselah might still be sleeping somewhere in the forest in the north-eastern Barrens, Alcoan resolved to try and find him. After several months of searches under the cover of darkness, and skirmishes with the local werewolves, Alcoan’s pack eventually pinpointed the location. Waiting for a night with no moon in the sky, the pack set out with shovels to dig the methuselah up. Just as they pulled Mithras’s body from the ground the pack was ambushed by the lupine guardians of the forest. A young Banu Haqim named Montgomery “Monty” Coven was the only member of the pack to survive the attack. Opting for self-preservation he threw the Ventrue’s body over his shoulder and sped off into the night. Sadly, he was not fully briefed by Alcoan on who the body really was. Desperately hungry from his exertions in the battle, he succumbed to the Beast, committing diablerie on Mithras.

Mithras' loyal toady and lover, Roger de Camden, has prepared a ritual to restore Mithras to his former power in a new body. This ritual required numerous objects of power from Mithras' past (a Ceramic Goblet (for his cult's version of the vaulderie), Mithras' seal (the wax kind), the Phyrgian Cap (a gift from Bindusara), the Ruby Ring (his gift from Kemintiri) and an Egyptian Dagger (a gift from Horus the Mummy)).

During the events of Fall of London, the Second Inquisition stroked the population of London's vampires, so there are a several possibilities:

Monty Coven is a Jamaican man with dark brown skin, a medium build, and neat braided hair. He wears welltailored shirts and slacks, with a few pieces of gold jewelry and cufflinks. Monty’s physical presence has a quiet rage just below the surface. It seems to be the sort of rage only killing will appease, so he is only still because he recognizes he can’t do that all the time. It is a feeling both Mithras and Monty share. The only physical indication that Mithras and Monty are struggling for dominance inside his body are his eyes, which occasionally shift from Monty’s dark brown to the lighter, golden tinted amber of Mithras’ gaze.

Montgomery (Monty) Coven, the Once and Forever Prince

Path of Power and the Inner Voice 4 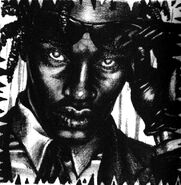 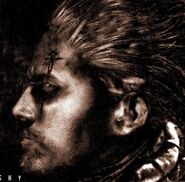 Mithras and Monty in Fall of London 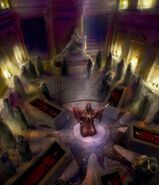 Objects of Power
Add a photo to this gallery

Retrieved from "https://whitewolf.fandom.com/wiki/Montgomery_Coven?oldid=242080"
Community content is available under CC-BY-SA unless otherwise noted.