When the first tribes of men migrated to Europe

Montano, born as Ontai, is the eldest childe of the Lasombra Antediluvian. A master of known and unknown Obtenebration powers, he stands among the ranks of the Lasombra antitribu.

As a mortal, Ontai was a Maasai of east Africa. Embraced by the Lasombra Antediluvian more than a thousand years before the birth of Christ, he was the first childe to survive his sire's brutal attention. Together they traveled the world before moving the Lasombra Clan from the Iberian Peninsula to Imperial Rome.

Montano assembled an elite legion of powerful warriors called the Victory Corps and led skirmishes and political maneuvers against other vampire clans, shaping the history of Europe. They were so successful that they received the reputation of being fearsome "night-dark troops", spreading a far reaching spy network across the Roman Empire.

As time wore on, [Lasombra] needed a fixed location to go into torpor. Sicily was the perfect place, far removed from Italy's wars and the Ventrue-dominated Holy Roman Empire. Montano and his sire built a great castle, not only for the Antediluvian's haven, but also as a central court to direct wars with the Germans.

During the early stages of First Anarch Revolt, Montano was sympathetic to the cause as many neonates were being eradicated by the Inquisition. However, when Anarch ideology began to creep into the Lasombra Clan, Montano and his soldiers were quick to crush it.[1] It was not until his "brother", Gratiano, betrayed the clan by joining the Anarchs that Montano developed a burning hatred for them. The betrayal ran deep when Gratiano aligned with Assamites to bring an Anarch raid right to the Castle of Shadows. The Lasombra Clan elders were killed and the survivors converted to the insurgency. Montano was the only one to escape, joining the newly founded Camarilla as one of the few Lasombra antitribu.

After the self-styled Anarchs destroyed [Lasombra]'s material body, Montano spent several winters wandering the northern ice, trying to reconstruct his own story. He had found that he simply could not do it. Too much time had passed. Too many other people's memories, human and vampiric, had passed through his blood and soul. He could only say with certainty, "this is what I am now, and I was such as would make me thus."[2]

Apart from his sire, Montano knows for a fact that his mastery of the Abyss is without peer, perhaps matched only by Boukephos. He tried to tutor several of his siblings in the dark arts, but there were always powers that only age could grant. It is said that he is the only one old and powerful enough to enter the Abyss without his body.

As far as his view on [Lasombra]'s supposed diablerie, he did not stick around to verify his sire's "death", and whatever memories he had of that fateful day, had been tampered with. Only an Antediluvian or a methuselah like himself could have done this, which may be one of the reasons why he suspects that [Lasombra] might have survived. 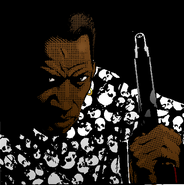