Molly 8, born as Ellen Conlynne, is 12th generation Tzimisce, a Necromancer and Necronomist within her clan. She is a member of the Librarians, a coven of Montréal.

In life, Ellen Conlynne was an Irish immigrant who arrived in Montréal in 1847. She watched as all her relatives died from the typhus epidemics that claimed many Potato Famine refugees. Ellen wept over every corpse, but she was not mourning over her loved ones; she was actually touched by the beauty of death. She even refuted God, believing that His existence marred the perfection of death itself.

Ellen's views on death and religion brought her to the attention of the St. Patrick Basilica priests who believed she had been horribly alienated during the typhus plague, and she was admitted into an asylum. At that time, Preacher of the pack Les Misérables took an immediate liking to her. He brought Ellen to a Creation Rite, where he was convinced by Béatrice L'Angou and Marie-Ange Gagnon to give them Ellen as a gift and Embrace her as a Tzimisce.

She trained under the care of her sire Marie-Ange, her stepmother Béatrice, and her godfather Preacher. She developed greatly in the Necromantic skills, using her ability to speak with the dead to lead to apparently successful experiments with wraiths.

Now called "Molly 8", she believes that life is about constant change and regularly sheds the outer layers of her skin, using them as parchment for her writing. She acts as the official scribe of the Librarians and is in charge of creating new pages for the Skintomes of the Litany of Blood.

Molly 8's haven is covered from floor to ceiling with long, treated strips of human skin of various hues. There are her tapestries and pages. Her skin is covered with graceful script and artwork. Due to constant shedding, Molly is porcelain-skinned, soft featured, and without any blemishes. Her pale visage is framed by the tresses of her deep-red hair, which contrast with her green eyes.

Path of Death and the Soul 8 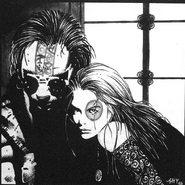 Christanius Lionel and Molly 8, from Montreal by Night. Art by Christopher Shy

Retrieved from "https://whitewolf.fandom.com/wiki/Molly_8?oldid=241426"
Community content is available under CC-BY-SA unless otherwise noted.