Mokolé are werelizards and werecrocodilians, descendants of the prehistoric Lizard Kings and one of the surviving changing breeds of the Classic World of Darkness.

The Mokolé serve the role of the memories of Gaia through the practice of Mnesis. There are no surviving turtle or tortoise Mokolé, and the snake varnas are now Nagah. During the Age of Kings, the Mokolé Lizard Kings were the dominant shifter species on Earth, until the event they call the "Wonder-Work" arrived and changed all that. Their society never truly recovered and later they were nearly wiped out by the Garou during the War of Rage. Although they can be very social with their own kind, these shapeshifters are generally distrustful towards outsiders because of this troublesome history,

A trait that all Mokolé share is the Mnesis ability, which allows them to remember thousands to millions of years into the past. The more dots invested in this ability, the further back the werelizard can remember. All Mokolé inherit knowledge of the language of the dragons, even if they have no other Mnesis. The Dragon’s Tongue was the common language of the Earth during the Age of Kings. Most could read and write its elaborate script as well. Many old-fashioned Mokolé refer to it as "the Speech" and will refuse to admit that "rat's chitter" is capable of fluent expression.

Mnesis brings knowledge of the Speech when a new Mokolé dreams her shape. If the newly Changed one has never heard the Dragon's Tongue, she will understand it but be hesitant to speak until she has heard more. Expression is idiomatic in the Dragon's Tongue, and figures of speech are common. "She has dug her nest" means that someone has made up her mind, while "to lash my tail" means to move towards a goal.

The Speech can be written phonetically, but is more often written using the original claw-print script. In classic tales, hand and body motions accompany the speech. The Dragon's Tongue is also the language of Mokolé in Archid, and even Suchid form allows some halting, primitive conversation in the Speech. Shrouded Sun adepts tell their students that the original form of the language was as a dance. The hand and body movements are called the Language of Claws and must be learned separately. Someone who knows this language can speak volumes without making a sound.

Mokolé, like most of the Changing breeds, have a vulnerability to a particular metal tied to a spiritual aspect. However, they are weak to not only one but two metals. The first of these is Gold. Like the Corax, the Mokolé are tied to the Sun, and thus are weak to this metal. However, the Mokolé born at night have maintained a tie between the Dragon Breed and Luna; and at any rate, the Mokolé are filled with Rage, called Luna's Gift. Therefore, they are also vulnerable to Silver.

While Mokolé can enter the Umbra, they cannot step sideways without the assistance of Gifts or Rites. Even then, most do not due to the danger that is had there. The souls of the Unfortunates unborn metis, called the Innocents, wait for their parents there. For this reason, most Mokolé venture into the High Umbra rather than the Spirit Wilds that other Shifters normally visit.

Through their use of Mnesis, the Mokolé remember the time of their rule. During the age of dinosaurs, the Mokolé were at their peak of evolution, having built a culture that rivaled that of mortals in their prime. But something went wrong -some blame the Wyrm for this, other claim that the Lizard Kings grew too proud and that Gaia's favor switched to the warm-blooded creatures- and the Age of Kings, the one true civilization in the eyes of the Mokolé, came to an end. The Mokolé began to sleep as the sun vanished from the sky and such began the Age of Sleep. The evolution of humans interrupted the slumber of the weredragons. As the sages say, Gaia made the first humans as breeding stock, so that all of the Fera could survive. The Mokolé took humans as their Kin and began to withdraw themselves from the Fera in order to preserve their memories. Soon, the mammalian shifters grew suspicious of their monstrous forms and their strange rituals, until the suspicion escalated into aggression and the War of Rage began. The Garou, who triggered the War, killed many Mokolé and destroyed many Clutches, for which the Mokolé have never forgiven them. The survivors fled into the swamps and jungles of the tropics, and many began to flee into their memories. There they lived nearly undisturbed, for the primitive mortals feared and worshipped them and the other Fera lived far away. The River Pact between the Silent Striders and the Mokolé of the Nile guaranteed them a period of peace and of contemplation.

Today, many Mokolé concentrate simply on surviving the Apocalypse, spawning enough clutches and breeding enough young Mokolé. They have seen the omens that heralded the end of the Age of Kings in the Dragon's Dream, and now hope to survive the coming mass extinction again. The Mokolé are the Memory of Gaia, and each one carries within him a myriad of ancestral names and faces. This tumult of inner voices makes it a wonder that the Mokolé ever get anything done at all, but in fact they have a complex social order, one traditional since the time of the Kings.

The Mokolé only have two breeds, the default homid and suchid breeds. Metis children always die before they are born and become angry spirits known as Innocents, which haunt their parents and mourn their lost chance at life.

Mokolé have three forms: Homid (human), Archid (draconic), and Suchid (reptilian). Their legendary Drachid form (a humanoid form capable of complex tool use) was lost in the Wonder-Work and no Mokolé since has been able to achieve it. A few Mokolé learn to assume a "Reptoid" form between Homid and Archid (similar to the Garou Glabro form) through careful practice and communion with spirits.

Stats in this form vary depending on the size of the animal in question. A saltwater crocodile will have a much greater strength rating than that of a Gila monster. Likewise, Gila monster and Komodo dragon Mokolé are poisonous.

Similiar to Corax, the Mokolé take their auspices from the sun rather than the moon.

There are no "tribes" to command the loyalty of Mokolé. Mokolé are neither pack creatures like the Garou, nor solitary like the Bastet. Instead, they are united into clutches, family-like groups of Mokolé and Kin. The clutches are localized and preserve the Memory of a certain area. Wanderers pass between them to unite what remains of Gaia's Memory. Clutches ally into streams, the four great "rivers out of Eden" which are the Mokolé.

The four streams are:

Each Mokolé has a Varna, which is the species it can produce offspring with.

The Mokolé are the oldest of the Changing Breeds. Paradoxically, they are at once the most unified and most divided. Unlike their old enemies, the Garou, who are one wolf species worldwide, they are many species and many genera: monitors, gavials, alligators, crocodiles, and Gila monsters. Their human forms are divided likewise among the human peoples of the tropics. Each Mokolé lives by the “moment of the sun” which marked the time of her birth in the day or year. The absence of Sun at night means that some Mokolé follow Luna instead; they are the only Changing Breed to revere both Helios and Luna (and because of the close relationship with these spirits, both gold and silver deal aggravated damage to the Mokolé). Complicating things further, the Mokolé are further divided into streams (the four great regional alliances of their kind) and individual clutches (local groups). Unifying forces, however, are stronger.

Most Mokolé maintain modest places were they can hide and spawn enough hatchlings to perpetuate their race. These breeding grounds are known as Wallows, home for both human and reptilian forms they take. Most wallows are places were humans and reptiles can coexist with one another: alligator farms in Florida, ruined temples to forgotten gods in India and along the Nile, riverside fishing communities in China, isolated hot springs in the Australian outback, and similar locales.

Like all intelligent life, weresaurians gather to form small, moderately social clans known as Clutches. Two Clutches may harbor grudges and petty rivalries for generations, sometimes warring over slight misunderstandings. Now, however, survival is the chief concern, and while killing each other is out of the question in these times, injury and shame is enough to quell most temporary hostilities.

In an ideal world, a healthy, functioning clutch depends on the relationships between the different aspects of Mokolé society. In the West, this is a grouping of all seven Solar Auspices also known as a "Perfect Clutch." However, these are far from ideal times. And as the dragon-shifters are few and far between, young weresaurians venturing out into the world are more likely to form an "Imperfect Clutch" of five auspices in their quests to change history.

Mokolé use a mix of Garou and Corax Gifts, in addition to some of their own. Many ancient gifts and rites are at their command, such as the Rite which allowed the Kucha Ekundu to survive in Africa.

Mokolé use the same Renown system as the Garou, revering the Tenets of Honor, Wisdom, and Glory. The degree to which an individual Mokolé follows each tenet is determined entirely by their Aspect (Auspice).

Helios has given his Children a series of moral and personal imperatives by which to live their lives. Called the Duties, these are the Mokolé precursor to the Garou Litany. Each Duty is connected to one solar auspice, although all Mokolé are bound by them. Violations of the Duties merit reprimands, loss of status, and other punishments. Serious offenders are eaten. The Unshading enforce the laws, although even Midnight Suns will chastise an undutiful Mokolé. Mokolé who have reached their First Change alone (lost hatchlings) are sometimes seduced by the Wyrm. These Mokolé, if they Fall to the Dissolver, lose solar gifts and mnesis.

Mokolé consider themselves neutral towards the other Fera, with the exception of the Ananasi, who are generally mistrusted.

As creatures of the sun, Mokolé do not get along with vampires. All attempts on embracing a Mokolé will fail. As a blessing from the sun, the Mokolé will either die immediately, or will enter a frenzy that ultimately destroys both the vampire and itself.

The Merit Bite of the Monitor is more dangerous than indicated, shifting upwards one level (season, month, week, every full day, every sunrise and sundown); Archid form suffers only -2 to Manipulation; the combat maneuver Wishbone causes Strength +5 damage.

Due to their cold blood, all Mokolé can soak fire damage when not in Homid form. 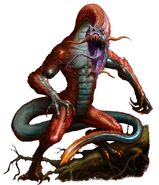 The Lizard Kings and the War of the Dragons, from Shattered Dreams

Typical Fera from the New World around 1500 CE. Mokolé on the left