Veddartha or the Ventrue Antediluvian

Mithras was a fourth generation Ventrue methuselah who ruled for centuries in Europe as the Prince of London and monarch of the Baronies of Avalon.

The man who would become Mithras was born in the territory where Iran is now located, and served in the military as a general of one of Indo-Iranic tribes. Mithras has always been a soldier. Even as a youth in ancient Persia, he played strategy games with the other youngsters, testing out different weaknesses in both the game and in his opponents. It was rare that he lost, though one time he did, he lost his temper and nearly beat the other child to death. From then on, nobody would play games with Mithras anymore. Mithras joined the Persian army and rose quickly through the ranks. Military life suited him, and he found nothing more satisfying than fighting alongside other soldiers, employing tactics he gained increasingly better mastery over as time passed. He was sent against rebels that hid in the mountains. After a long and bloody campaign, all the rebels were decapitated except one, who walked into Mithras' tent unmolested. With his supernatural power, he silenced the general and explained himself to him. He held no ill will, but rather was impressed by the general's capabilities and offered him everlasting life or a quick death. Mithras chose to live and bide his time to return, faking his own demise and exploring his new powers. When he returned to human civilization, he was revered as the living "war god" of various peoples. As the Lord of Light, Mithras portrayed himself as the bringer of civilization and morality, who spent his days guiding the sun through heavens and thus only appeared at night.

The Cult of Mithras quickly spread in the Orient and when Mithras heard of Rome, he chose to travel there. The Roman armies fascinated him, as he had been a soldier himself in life, and he accompanied them to the various corners of the Empire, preferring it to the stale Cainite politics in Rome itself. His cult spread through the military and became one of the great mystery religions in the Imperium Romanum by the time of the Roman Emperors. Mithras himself settled in Londinium in 71 CE – the constant warfare against the barbarians pleased him. He wandered around the island for a long time, encountering native vampires that were not pleased with the intrusion. Through shrewd manipulations, Mithras managed to ascend to a position as "First Among Equals" among the native Cainites. His haven at the Mithraeum in Londinium became a meeting place for various scholars, among them his clanmate Bindusara and the Assamite Antediluvian Haqim.

Mithras' reign was, however, challenged by a similar mystery cult that would later be the new state religion of the Empire. When Rome's attention no longer reached to Britannia, many younger vampires blamed their sires for the decline of their herds and a civil war shook the Cainite ranks of Britain. Although Mithras remained victorious, he was wounded and retreated to torpor for a long period of time.

The Prince of Avalon

Mithras awoke after a battle was fought over his resting place in 1069, although he did not return to Londinium until 1085. When he returned, he found the Romans gone, replaced by the Normans and the Cainites ruled over by a triumvirate of elders. Attempts to rebuild his cult and influence initially met stiff resistance from other Cainites, but through subterfuge and manipulation, he was able to clear his path to power, eventually regaining acceptance as the lord of the Court of Avalon just as mortal society stabilized under Henry II. He returned to London in 1154, taking his place as the monarch of the Baronies of Avalon, one of the supreme Cainite feudal realms in the Long Night.

During the War of Princes, Mithras fought with the revolting Toreador of Anjou, establishing the Rose Treaty styled after the Magna Carta in response. Furthermore, in 1212, he confronted the immortal Avenger Horus within his domain, after the mummy had wounded his loyal warlord Aethelwulf. The monarch was weakened from the battle against the Immortal, so many barons probed open revolt against him. Mithras answered to this by opening his council, including Cainites from all baronies across England. During this time, Mithras began to travel again, following the military conquests of King Edward, leaving his chamberlain, the Cappadocian Lord Camden, to rule. When Mithras returned in 1348, the Black Plague ravaged his city, making feeding difficult for the native vampires. Mithras reacted by expelling unwanted Low Clans like the Followers of Set and the Tremere, but it did not solve the problem.

During the Anarch Revolt, Mithras at first refused to join Hardestadt the Elder's Camarilla, claiming that he "would never scurry in the shadows". In a conference between Camden and representatives of the Ventrue and Toreador in 1486, he accepted the basic tenets of the sect, although he did not join them fully, though he streamlined the Blood Laws within his domain to resemble the six Traditions as formulated by the Camarilla. The distance between the Courts of Avalon and the Camarilla made it neutral ground for the Convention of Thorns. Insurrections against Mithras' rule rose up again during this period, fueled by the Wars of the Roses among mortals. Mithras staked the Baron of Lancaster, Nathaniel of Carlisle, for slaying Aethelwulf. After Camden's assassination in 1514, the Duke of Amber became Mithras' seneschal when the prince became absent, often disguising himself as a minor noble in the court of King Henry VIII or traveling across Europe. When he returned and found out how his childe had given the Toreador of Scotland great lenience and even a pawn in the royal house, he removed his childe from office and elevated Valerius as his right hand. In the following Civil War among the mortals, Mithras supported the Parliamentarians in order to purge the royal line from Toreador influence. It was only the mediation of Justicar Violetta that cooled down the relations between the Toreador and the Ventrue.

After the disastrous result of the Great Fire in 1666, as well as the involvement of Sabbat lackeys, Giovanni spies, and Setite freelancers surrounding the mysterious Sargon Fragment, Mithras took a far more personal role in ruling his princedom. He banished the Setites again from London, this time under the threat of Final Death for any clan member discovered in his domain. The Treaty of Durham of 1693 established Ventrue supremacy in Britain over the Toreador. To further forswear any influence on the royal house of Britain, he claimed them as personal domain, barring the influence of every Kindred except himself. When he left London in 1798, he was surprised by the events of the French Revolution and became lost, although rumors claimed to have him active in the Far East and other provinces of the Empire. He returned in 1885, not impressed with the stewardship of Valerius, instead naming Anne Bowesley as his new seneschal.

He spent a small amount of time in a mortal insane asylum, due to a mental breakdown caused by his former lover, the Setite Kemintiri. When her manipulations were revealed, and she fled after being defeated by the Toreador Lady Regina Blake, Mithras came to his senses and again banished the Setites from London. By that time he also dealt with the rogue Malkavian William Biltmore, worked to keep the Tremere influence on Britain contained by using Malkavian proxies, making many enemies within the clan in the process, and was concerned about Dracula's intrusion in his domain.

Mithras was driven into torpor during the German Blitz of London during World War II. He awoke in 1996 only to be immediately attacked by an entire pack of Lupines. He defeated them, but was exhausted and horribly wounded. Shortly thereafter the fledgling Cainite Monty Coven stumbled upon him and diablerized the methuselah.[1][2]

The mages of the Celestial Chorus honor Mithras as an early Singer. Some, particularly the Sons of Mithras faction, go so far as to recognize him as a deity. On the other hand, the Earthbound demon Asmodeus uses worship of Mithras (in the form of the Mithra's Wisdom cult) as a front for his activities.[citation needed]

Mithras was of medium height, with a compact and slightly muscular build, swarthy skin for a vampire, classically handsome features, dark eyes, and dark hair worn shoulder-length in loose curb. He normally wore a soft cloth hat of some sort, preferring the ancient Phrygian cap. He preferred loose clothing that did not impede movement.

Mithras
Epitaph: The Prince of Light, The Conqueror of Britain, The Lord of Light, The Sun
Quote: “I am your God, bringer of light. Bow before me or die.”
Sire: "Unknown Persian Vampire"
Embraced: 1880 (born 1870 CE)
Ambition: To be wholly independent from the machinations of others
Convictions: I am a God.
Touchstones: No mortal Touchstones
Humanity: 3
Generation: 4th

Before Restoration by the Artifacts

From Libellus Sanguinis I 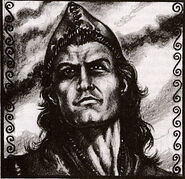 From A World of Darkness 2nd Edition 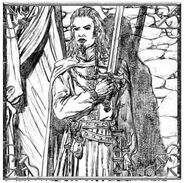 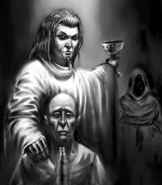 From London by Night 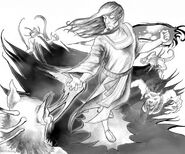 The Coming of Mithras. Artwork by Jim Di Bartolo

Mithras and Monty in Fall of London

The Mithraists in Cults of the Blood Gods

The Mithraic Mysteries in Cults of the Blood Gods

The Cult of Mithras in Cults of the Blood Gods 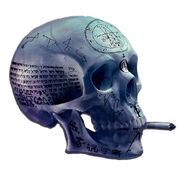 Image from the Loresheet "The Cult of Mithras"