possibly Way of the Resplendent Crane

Ming-Xiao (明曉) was the leader of the Kuei-jin in Los Angeles, and a self-proclaimed High Priestess of Chinatown who operated from the Temple of Golden Virtue.

Xiao's appearance in Los Angeles is fairly recent, but she has informed herself rather well on Kindred lore. She was well acquainted with Chinatown's prominent people such as Wong Ho, a respected businessman.

She is one of the toughest bosses that the player faces in VTM: Vampire: The Masquerade - Bloodlines , with a whopping 1400 health. 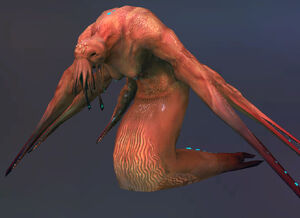 During combat with Ming-Xiao's Demon Shintai form, keep in mind the following:

Although her Dharma is not immediately obvious, it is likely that she possesses the Flesh Shintai at level five (Ten Thousand Forms) in order to disguise herself as Nines Rodriguez.

As she is observed teleporting around the city, it is also possible that she possesses level four (Ride the Dragon) of the Tapestry discipline.

A strict reading of Demon Shintai would also indicate she possesses at least level seven of this discipline in order to account for her six tentacles: she would have to be past level 5 because she possesses more than two tentacles, and at least 2 points in the advanced levels to afford her the four extra tentacles (as each advanced level grants two points to upgrade a demon form with).

In Kuei-Jin terms, this would usually make Ming-Xiao an Ancestor at the very least.

Ming Xiao's nude portrait, obtainable through a game's side-quest
Add a photo to this gallery

Retrieved from "https://whitewolf.fandom.com/wiki/Ming_Xiao?oldid=268928"
Community content is available under CC-BY-SA unless otherwise noted.