Patriarch of Constantinople
Michael, born Mi-ka-il, and also known as Beshter, was a powerful Toreador methuselah that inspired the Dream and ruled Constantinople along Antonius and the Dracon. He had delusions of divinity, and instilled in Vykos the need to continue his quest for building Heaven on Earth. He was diablerized by Mary the Black in 1204 CE.

Mi-ka-il was born in the Mesopotamian city of Ebla. He became the King's scribe and garnered the attention of Arikel who Embraced him. He spent the next 50 years in Ebla adored as a god in the company of his lover Ma-Ri. When Ebla was captured by the Akkadians, he was taken during the day to Kish on the Euphrates. He never recovered from the loss of Ma-Ri.

To flee from the Akkadians pursuing him, he renamed himself Beshter and traveled across the land for a thousand years. In 500 BCE, Beshter arrived in Byzance to live there for one year. Then he left again for the Seven Hills and to the burgeoning city of Rome. He helped Rome's artists increase their talents. Sometimes, he left to observe the cultures and regions conquered by Rome.

Thereafter, he gave his lands to his progeny and his two lovers, Dracon and Antonius. When the Christian religion became powerful, he adopted it and renamed himself Michael, after the Archangel Michael. By the time Rome was falling from grace, he left with Antonius and the Dracon to live in Byzance. Antonius was the Father symbol in the Trinity, Dracon the Holy Ghost, and Michael was the Son.

The dream lasted for nearly a thousand years, but eventually the tensions among the Trinity and their families became so extreme that they led to Antonius' destruction by the hands of Caius in 796 CE. Antonius' death was mourned by both Michael and the Dracon. The Dream had become dysfunctional leading to Michael's growing insanity and the Dracon abandoning the city.

With this turn of events, Michael assumed the role of the Patriarch, with the faction of the Antonian Ventrue as the Son, and the Draconian Tzimisce as the Holy Ghost. His delusions of grandeur, however, led him to believe that he was a true Archangel. His mental instability certainly became aggravated due to the loss of his lovers, it was the decisive demented influence of Gregorius Dimities that threw the Toreador's mind down the well. Michael's haven was a subterranean copy of the great dome of Hagia Sophia, under the great church. After his Final Death, it also became his tomb.

After being diablerized, Michael remained conscious inside the body of Mary the Black, waiting and watching as he subtly pushes her, attempting to exert his will over her body. Michael forced Mary to burn the tumorous Dracon from Vykos’ body, as he believes his former lover to be of similar mind after eight centuries of imprisonment. He nurtures the Dracon as the Tzimisce slowly heals, showing he can be the Father to the Dracon’s Son. A new Holy Spirit is required, however. Michael makes entreaties to Cainite philosophers in efforts to find a vampire who was destroyed and rose again. Michael will rebuild his Dream in Constantinople, or wherever he discovers his Holy Spirit.

Through the union of Chimerstry and Presence, Michael appeared in the guise of a stained-glass angel. Light shined through his form, his face was unchanging with calm benevolence, emotions played off the shimmer of his halo, and his winged body sparkled. Above all, his presence demanded immediate supplication. He never spoke to his lessers, his very actions were his words. Beneath all he needed nurturing, guidance, and understanding. 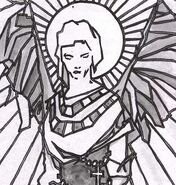 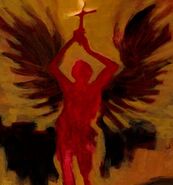