Murdhuacha
Merfolk are a species of changeling. A matriarchal people that have originated tales of the folklore's mermaids.

Ancient and unknowable, the merfolk pose something of a problem to the Kithain. The arrogance of the mer is tempered only by their truly alien natures, for merfolk never mate with dreamers. Mating exclusively among their own kind, the merfolk claim that they are the sole legacy of the Tuatha De Danann, the oldest fae on Earth, dreamed long before any human ever set foot on land. When curious changelings ask how this could be, the merfolk are disconcertingly vague and ambiguous.

As it is common among changeling, the merfolk subscribe to the court system and they might be Seelie or Unseelie. However, they also divide themselves into Houses that determine their seeming. Each particular branch of the merfolk "trident" has its own place in the mer society, representing a member of the Undersea Triat. Unlike land-based kithain, the merfolk all believe themselves to be nobles in some capacity or another, and all pledge their allegiance to a house. Entrance into a house is typically based on the merfolk's Apsara, and each one has its own slant on Undersea life.

More than any other Kithain, merfolk equate Banality with death — if they lose their Seemings, they can no longer breathe. Instead, merfolk take their Glamour from the sea, much as Nunnehi harvest it from the land. The powerful cetaceans called Rorqual bring the dreamstuff to the merfolk in their coral cities — vast, bio-architectural masterpieces that resemble reefs to the untrained eye.

Merfolk revere a powerful entity called "Vatea" — their creator in their legendary, and according to them, the creator of all life. Vatea was the one who gave them Apsarae, or fish-spirits. All mer, be they merfolk or the Thallain murdhuacha, have an "Apsara" which is the sea creature to which the particular mer is attuned. While the vast majority are the fish-tailed people of legend, there are still seahorse, eel, shark, turtle, porpoise and even the rare whale merfolk.

The Apsara of the changeling determines her house and even her social placement, to some degree. The majority of shark merfolk are warriors, and porpoise mer are predisposed to become scholars. It's not certain if the grafted Apsara influences the young nix's personality, or if the nereid already has a disposition that attracts a predestined sort of Apsara to the Grotto. The merfolk don't ask the question all that much themselves; what will be will be, and there's no point in arguing with Vatea's will.

The merfolk are certainly an odd lot. The product of a totally alien mindset, the mer are simultaneously deadly, serious and playful, highly ritualized and completely free spirited, repressed and yet libidinous as a drunken prom date. The first thing one will notice about a mer is his incredible arrogance. Of course, as far as they are concerned, they have every right to be arrogant. After all, they do rule the world.

Unlike the prudish sidhe, the merfolk don't see a quick tumble (well, a quick tumble that isn't carefully covered up) as an affront to their dignity; sex is a popular form of recreation among their kind. They also enjoy eating, and merfolk cuisine is certainly an experience, although few would call it unpleasant. Artistic expression is very important to the mer — most of the "work" that they do is actually the creation of great undersea masterpieces. The world that the mer inhabit has just enough Banality to stave off total Bedlam, outside of that, it's all for the most part free time. The merfolk enjoy their carefree lives, but can snap to seriousness in a second.

Merfolk.jpg
An average mermaid, as depicted in Blood-Dimmed Tides.

A mer from House Syrinx.

A mer from House Melusine. 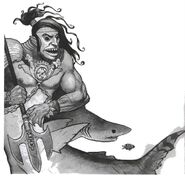 A mer from House Lorelei.

This Changeling: The Dreaming-related article is a stub. You can help WWWiki by fixing it.
Community content is available under CC-BY-SA unless otherwise noted.
Advertisement