Menele, originally known as Meneleus, is a powerful Brujah methuselah of the Fourth Generation who lies in torpor somewhere in the area of Chicago, during the Final Nights.

Before his Embrace by Troile, Meneleus was a king in ancient Greece during the 13th century BCE.

Troile, a philosopher who traveled widely since the destruction of the Second City, found the scholar-king, Meneleus of Sparta, most fascinating. At the end of the night, Troile took Meneleus to her haven north of the city; there they spent the next several months deep in conversation. Finally, Troile decided that Meneleus possessed all the elements required to make him worthy of immortality. Thus, Meneleus became Embraced by Troile into the Brujah.

Menele was told about the Brujah utopia founded in the city of Carthage by his clanmate Altamira, and eventually the pair made their havens there. He was amazed by what the Cainites of Carthage had accomplished and soon fell into the role of traveling diplomat due to his reputation as a mighty warrior and orator. When the Punic Wars began, Meneleus left the city to seek aid from the Nosferatu and Gangrel of the southern continent. He was therefore not in the city by the time the great betrayal came – some say at the hands of a beautiful Toreador named Helena, who was Meneleus' nemesis.

After Carthage was utterly destroyed by the Roman legions, Menele hunted Helena down to the city of Pompeii. There, he voluntarily entered his first Frenzy in a thousand years, and his anger was combined with a powerful thaumaturgic ritual that awakened a spirit of fire inside Mt. Vesuvius. Everything around the volcano was destroyed, and Meneleus himself only escaped Final Death by jumping into the harbor. His Toreador nemesis also somehow survived the catastrophic destruction of Pompeii.

After this narrow escape, Helena was gaining the upper hand in the Old World through her ghoul Prias. Menele instructed his servants to sail westward with his torpid body searching for the what would modernly be known as the Americas. He somehow knew of the existence of the New World through ancient Phoenician legends, and became one of the first Cainites to make the voyage to the New World around 1415 CE. Once there, he was partially responsible for the Inca and Mayan rise to power, while trying to grow an army against his archrival in a "New Carthage".

The Spanish Conquistadors came, however, and wiped out the native population around the Yucatan peninsula under the guidance of Helena. Menele was forced to mingle with the Pueblo and flee to North America where he soon became a major influence over the Native American populations. For a long time, Menele dwelt peacefully in their midst, eventually even gaining the begrudging acceptance of the native Garou tribes of the region while he pursued further the elusive path of Golconda.

Peace was not meant to last. As Helena caught up to Meneleus, the rivals met again in the Battle of Fort Dearborn around 1812. The two methuselahs clashed in the middle of that struggle between the U.S. Army and the Native Americans, and as a result they both were tremendously wounded and succumbed to torpor. Nevertheless, their deep sleep did not mean the end of their feud, as they both called for their supporters through the disciplines of Presence and Auspex, waging a proxy war for the years to come.

During the epic War of Chicago in 1993, which saw the city's Cainites and Garou at each other's throats, Menele remained, for the most part, as an observer. But later, he made an attempt to use the Daughters of Cacophony to manipulate Helena via her pawn, the neonate Portia.

According to the Vampire 5th edition version of Chicago By Night, Menele has been drawn east by the Beckoning and so no longer slumbers under the city. The book also mentions that Critias has felt his bond to Menele snap, which may mean that Menele has died the final death. 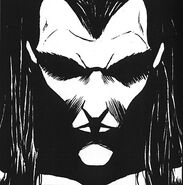 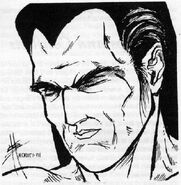 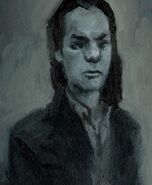 Menele in The Chicago Folios

Retrieved from "https://whitewolf.fandom.com/wiki/Menele?oldid=248490"
Community content is available under CC-BY-SA unless otherwise noted.