Meerlinda of Wessex was one of the seven founders of the vampiric faction of House Tremere that later became Clan Tremere.

She had a large part in the creation of the Camarilla, although Meerlinda's efforts were mostly disguised as Etrius's ideas.

Looking like a mature and attractive woman, she is the sober-minded and rational part of the Inner Council of Seven of Clan Tremere. Within the old House Tremere, she was the only woman deemed worthy by Tremere to accompany him to the highest reaches of magic. A born diplomat, Meerlinda tried to solve the problem of the waning magic of the world by enacting a great ritual that would wrench the vis from the earth itself. To this end, she made contact with several Covenants spread all across Europe to gather their support.

Meerlinda was a participant of the ritual that transformed Tremere and his most trusted acolytes in vampires. Meerlinda chose not to side with Goratrix defense of the ritual afterwards, nor did she join in on Calderon's and Etrius' accusations. As a result, she kept the respect of both, being able to play the role of the peacemaker within the council. Her main role was to make her Clan palatable to the rest of Cainite society, so that they would leave their Low Clan status behind. Her role as the councilor of Great Britain was to research the legends concerning the Holy Grail, possibly to find a way to circumvent the need for blood by unlocking the secret of transubstantiation. In 1394, she proposed with Hardestadt what came to be the Camarilla, a century later. She is a skilled manipulator who knows how to use schismatic Tremere and supports a few of them for her own purposes.

Once she ruled over the Clan Tremere in Great Britain, but after the rise of the New World she was sent there, where Meerlinda learned that this position was not a curse but a blessing, since she is extremely powerful nowadays and one of the greatest players in North America.

In the Final Nights, Meerlinda resides in a chantry in Dallas, Texas, but is also traveling a great deal and spends considerable time in Europe. She is in charge of the Tremere project of combining the research from the Family History Center in Salt Lake City with that of the Human Genome Project to unlock knowledge of the True Name of Mankind.

As other members of the Council, she was present during the attack on the Vienna Chantry by the Second Inquisition, in 2008. However, the Praesidium believes her to still be alive, and either in torpor, captured or resting somewhere in Krakow, Rome or Moscow.[1] 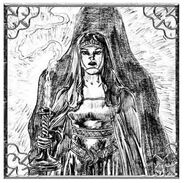