Decani
Mary the Black, also known as Ma-ri-ah and Black Mariah, is a Baali methuselah of great renown.

She was born as Ma-ri in the city of Ebla. At a young age she became a ghoul of the Toreador methuselah Mi-ka-il, but was abandoned by him and killed herself during the siege of her city.

Infernalists resurrected her centuries later, and she was subsequently Embraced as a Baali by Anaduk. During the fall of Constantinople in 1204 CE she committed diablerie on both Peter the Humble and the hated Michael, who was the Patriarch of Constantinpole's Cainites and the leader of the Dream.

Mary was originally known as Ma-ri, a beautiful girl who was the daughter of a local ward boss in the city of Ebla in ancient Syria. Ma-ri became a loyal disciple to a Toreador named Mi-ka-il (later known as Michael). In return for her service, Mi-ka-il gave Ma-ri his blood to drink, keeping her forever young as a ghoul for many years.

Eventually Ebla was assaulted by the Akkadians and Mi-ka-il fled the city, leaving Ma-ri alone. As the city was under attack, Ma-ri spent her last days writing her life story on clay tablets, inscribing her history, knowledge, and newfound hatred for her master. As the invaders entered, Ma-ri gutted herself with her sword, spilling her blood on the tablets. The fires from the burning city baked the tablets, preserving them. They were lost during the invasion, but were rediscovered in Ma-ri's unearthed home three centuries later. The tablets were scattered across the lands. Finally, a Baali servant discovered some of them and took them to his master, Anaduk.

Anaduk discovered the tablets held more than just words, but also Ma-ri's memories. Using Auspex, Anaduk sank deep into Ma-ri's passion and hate. He fell madly in love with her and wanted desperately to find a way to bring her back to life. He made a deal with his demon master, Anoster, who in return for Anaduk's remaining soul gifted Anaduk a succubus who could consume the tablets and become the product of whatever was contained in them.

The tablets were incomplete and Ma-ri was only partially recreated, full of disjointed and partial memories and corrupted by hate. She slew Anaduk upon waking and gorged on his blood, becoming a Baali in the process. She fled into the night, searching for the other missing tablets.

Down the centuries Ma-ri had remarkable success locating all the lost tablets along with the sword she used to commit suicide. In 1204, Mary the Black, as she was now known, discovered the whereabouts of Mi-ka-il within Constantinople. Making a pact with the Nephandus Layla Madeer within the House of Lamps, she gained entry and found access to Mi-ka-il through Peter the Humble. During the Fourth Crusade she attacked, diablerizing the methuselah. When she did, she gained parts of his memories, learning that he never intended to leave her and that the only reason she had succeeded in killing him was because he had allowed it. Falling into a Frenzy of rage, Mary rampaged through the burning streets of Constantinople, systematically hunting Michael's descendants within the city. Afterward, she fled to Tyre, where her clanmate Tanit offered her asylum and protection against any Cainites that had learned of her involvement in Mi-ka-il's death.

Mary turned her attention to overthrowing her demonic keeper, Anoster. It was a member of the Decani, a group of 36 disease-ridden demons who are typically the masters of individual Baali. By the 18th century, Mary amassed enough power and demon allies to usurp Anoster and become a full fledged member of the Decani.

Mary the Black and Michael the Patriarch became one after she diablerized him to complete her vengeance. But, in so doing, she cursed herself with the burden of knowledge and a truth that scourged her soul. Her revenge was empty, for the man she loathed to the depths of her being had not abandoned her of his own will, but had been forced from her side and had never, in his heart of hearts, ceased to love her.

In the depths of her own grief and madness, she sought death to blot out this knowledge... but instead, in the deep places of her own being, she found what was left of him, and together they became more than they could ever become alone. Istanbul remains a shining beacon of mortal faith above, a city sacred to many; now, below, in the remains of Michael’s long-abandoned haven, Mary the Black forges a Well of Sacrifice that will make its underbelly a perfect reflection of hell on Earth, as well. She  intends to make Constantinople a literal gateway to Hell, recruiting to her side the Carthaginian Assamite Eshmunazar, and reaching out to Dylan Bruce to become the third party. She intends for the ancient Eshmunazar to act as darkness, while she and Michael play the role of balance. Dylan Bruce is to become Lucifer’s light, before plunging the entire city — and possibly the world — into Hell. Michael is conscious inside the form of Mary, waiting and watching as he subtly pushes her, attempting to exert his will over her body.

Mary appears as a young woman of 15, her eyes rimmed with red flames, her skin pitch black, and though she appears burnt, her visage betrays no blemish or damage. She conceals her sinister appearance under a dark hood.

Path of the Devil 10 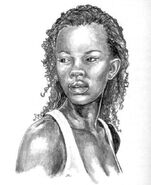 Ma-ri, from Road of Sin 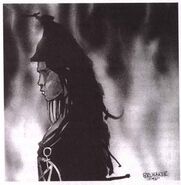 Mary, from Constantinople by Night. Art by Jason Brubaker