Constancia
Markus Musa Giovanni, Claudius's youngest great-grandchilde, was inducted into the clan for his acute sense of curiosity and keen intellect. Once Embraced, Markus Musa proved to be an exceptional scholar, and above all else an excellent historian, a dangerous mix when combined with the Giovanni's deep-rooted sense of ambition.

He was one of the earliest Giovanni, back in the days when that clan was still but a bloodline of the Cappadocians. He took pride in his lineage as a Cappadocian and sought to prove the worth of his family to the skeptics in the Clan.

Well-regarded for his scholarly pursuits, he was sent to Constantinople alongside Alexia Theusa to help the Latin Cainites in establishing a base in the city. His other task was finding lore about the elders of the Cappadocians, mainly on Cappadocius himself. To this end, he tried to enter the Library of the Forgotten, but was denied access.

The red-bearded Giovanni survived the Bitter Crusade and continued to search for the Library of the Forgotten in the aftermath of the sack of Constantinople. He managed to find Alexia's haven and her staked sire, Byzar, and learned of the Sargon Codex (a set of prophetic visions made by Cappadocius during his lifetime). To this end, he set off to Egypt in search of the infitiores.

He succeeded in a fashion: he was captured by the Lazarenes and taken to Lazarus's lair and was introduced into the methuselah's plan to achieve Apotheosis. He managed to escape, however, and joined Constancia's plan to bring the Codex to Erciyes. In the following struggle, the Codex was unwillingly destroyed by Lazarus, who smashed the ceiling of his lair to take all of the intruders with him. Constancia and her retinue managed to escape, but the Codex was lost.

After that, Markus was declared an official envoy of Constancia and tasked with protecting Malachite the Nosferatu, as well as the destruction of any remnants of the Dream they would find. During this endeavor he suffered Final Death when confronted by the Dracon after aiding Myca Vykos and his coterie in exposing the methuselah's ruse as the heretic Archbishop Nikita. In that occasion, the Tzimisce Antediluvian possessed Ilias's body and tore the Giovanni's heart from his chest with his bare hands.

Markus crumbled to dust without even a scream, his empty clothing and many chains (which he used to bind the spirits of the dead) falling to the floor in a heap.[1] 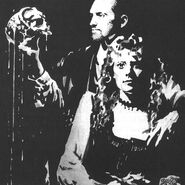