Mark Decker is the reluctant Prince of Milwaukee and a renowned werewolf hunter.

Decker was Embraced during the American Revolution. His sire, Lucian, could not bear to kill him when he had only intended to feed from the dead or dying, so he gave Decker the Embrace. For a time, he and his sire lived together on a plantation, feeding from the slaves there. After the Civil War, the plantation was destroyed and both forced to go north.

Decker eventually settled in Milwaukee, where he maintained a simple haven until a pack of Lupines ambushed him, forcing him into panicked flight. In terror, he killed most of his mortal herd. Vowing vengeance, Decker formed the Anubi, a group dedicated on protecting vampires from werewolves. Over the next century, the Anubi set themselves apart from Milwaukee's Kindred society and triumphantly claimed nearly a score of Lupine scalps as prizes.

In 1992, Justicar Ulisyan Thracs was murdered by orders of Prince Terence Merik, and a short time after Merik was brought to justice, a massive Lupine attack hit Chicago. Divided in political power struggles over the position of prince, the Kindred of Milwaukee were paralyzed and unable to fend off the the tide of Lupines and witch-hunters that descended on them. Forced to act, Decker returned to the city. He approached the ancient Ventrue Hrothulf – whether to secure the old one's assistance or assure his non-interference is unclear – and then paid a visit to the haven of one of the contestants for the title of prince. He slew him and then returned downtown. With the Anubi arrayed behind him, Decker entered Elysium and declared himself prince.

Due mainly to the Lupine threat, Decker keeps Milwaukee on a war footing. Former Anubi fill most major positions in the city, and meetings with the council have become an oft-forgotten formality. He enforces the Traditions strictly, and regularly disallows even ghoul creation as a Masquerade risk. When Xaviar declared that the Gangrel would leave the Camarilla, Decker stayed, although he mistrusts the organization. He keeps close contact with Inyanga in Chicago, and her influence on his mindset lets him sometimes reconsider his decision. 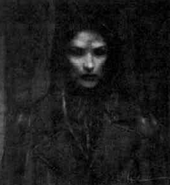 Retrieved from "https://whitewolf.fandom.com/wiki/Mark_Decker?oldid=229744"
Community content is available under CC-BY-SA unless otherwise noted.