Malgorzata was a childe of the infamous magus Goratrix, and the leader of the Conspirator Faction among the Tremere on her sire's behalf.

Malgorzata was the sixth child of Romanian nobles forced into serfdom. Serving as a young field worker, she was purchased by Goratrix. He sensed great power in the girl and made her his apprentice. Malgorzata became a coarser, less subtle version of her master, emulating and exaggerating his most blatant traits. By the age of 13, she had become a full mage.

Her boldness and quick rise won few friends but won the admiration of other apprentices. She begged Goratrix to make her immortal like him, but Goratrix was not allowed to Embrace outside the Council of Seven. Instead, he broke a lesser rule and made her a ghoul. For decades, she begged him to lobby Tremere to her cause, finally gaining the Embrace a tortuous 75 years later. The long wait made her bitter towards Tremere and towards Etrius, whom Goratrix blamed for his master's cautiousness.

A great Tzimisce offensive in 1105 CE crushed all the Transylvanian chantries outside Ceoris. Needing a weapon to fend off the Tzimisce and their allies, Goratrix, with Malgorzata at his side, began experimenting with human and Kindred anatomy. Malgorzata kept the other Tremere focused on their work by reminding them their lives depended on the project's success. In 1121, the first of the Gargoyles was unveiled. By 1125, the Tremere had created enough of them to turn them loose. The Gargoyles turned the tide in their war against the Tzimisce.

When internal politics exiled Goratrix to France, Malgorzata stayed behind at her master's command to undermine Etrius' rule. While Etrius was away from the Ceoris chantry, Malgorzata began disobeying his orders and started her own faction of loyal followers, hoping to one day supplant him.

After Goratrix left the clan and joined the Sabbat, Malgorzata remained his eyes and ears until the 1570s, when Tzimisce anarchs captured her during a raid. Taken prisoner and tortured, she revealed all she knew about Ceoris' defenses and Tremere's plans. Goratrix found her several horrific decades later, but left her there to linger.

She spent the next several centuries bound to heated iron bands and twisted into a writhing, mindless thing. In the early 20th century, she was discovered by Lucita, Anatole, and Beckett. By this point she was a horribly deformed, insane, thirst-crazed Cainite. They did the kind thing and, after three tries, succeeded in finding her head and cutting it off.

Malgorzata is described as a Sabbat Priscus in her Vampire: The Eternal Struggle card. This conflicts with the books, which state that she remained with the clan after her sire became an antitribu.

Path of the Devil 6 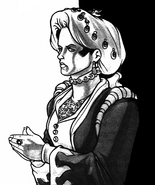 From House of Tremere

Malgorzata VTES card. Art by Mark Poole
Add a photo to this gallery

Retrieved from "https://whitewolf.fandom.com/wiki/Malgorzata?oldid=225784"
Community content is available under CC-BY-SA unless otherwise noted.