Malachite, born Maleki, was an influential Nosferatu of Constantinople, and one of the most fervent believers of the Dream.

He is also the signature character of the Nosferatu clan in Vampire: The Dark Ages.

Born in the 8th century/9th century as a native of Constantinople, Maleki grew to be an Eastern Orthodox priest. He gained a benefactor in the form of Magnus, a Lasombra elder. As a ghoul with a powerful, if mysterious, patron, Maleki eventually rose to the rank of bishop. Unfortunately, he had a public disagreement with Magnus that resulted in earning his benefactor's ire. For wounding his pride, Magnus had Maleki Embraced by a Nosferatu, Vasilli the Penitent Dog.

Reborn as a Cainite, Maleki lived in despair until he was taken under the wing of the Toreador Michael, Patriarch of Constantinople. He took the blood oath and gained the protection of Michael, becoming a servant of Michael's Dream. He took the name Malachite and also came to be known as the "Rock of Constantinople" and a respected elder among the Lepers of the East.

During the Fourth Crusade, the city of Constantinople was sacked by their fellow christian crusaders (encouraged by the Venetian Doge and perhaps the Lasombra). In the chaos that ensued, Michael was diablerized by a Baali, Mary the Black. The loss of Michael devastated Malachite. He left the city for many years and searched for a new hope. Malachite found his purpose with the Tzimisce methuselah known as the Dracon. After their meeting, Malachite was inspired to return to Constantinople, free it from Frankish control, and return the city to its former glory.

Upon his return, Malachite reconstructed the warren beneath Constantinople, watching as his city fell in the hands of the Turks and changed its name. Nonetheless, he refused to leave the city again to its fate, instead taking Nosferatu from every faith and denomination into his custody while expanding the territory of his Nosferatu Kingdom deeper into the earth. Today, the warren of Istanbul is one of the most diverse among the Clan, bound together by Malachite's authority and stoicism.

In modern nights, it has been said that Malachite has gone to Damascus, hunting the last remaining Baali, still seeking retribution for Michael's diablerie.

Note: In 796 CE, Malachite is recognized as leader of his Scion family. So, by logic and probably, he was embraced in 742 CE. Not in 842 CE. How could he be the leader of an Scion family before being embraced? 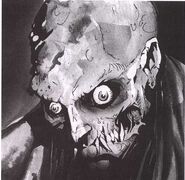 From Constantinople by Night. Art by Jason Brubaker 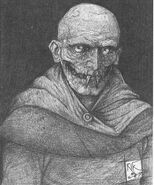 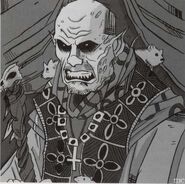