Madness Network is a term used by Malkavians to describe the psychic link shared by all vampires of the clan. It is also known as the Cobweb, the Tapestry, the Weavery, and by a dozen other names.

Even within the clan, few understand the nature and purpose of the Network, though all agree that Malkav himself is somehow involved. One of the more popular theories is that Malkav no longer exists in a physical form, but instead is a psychic entity – Malkav is the Network. Others claim the Network was created by him in order that he may use every one of his childer as his eyes and ears in the mortal world.

The Network's main function seems to be bringing Malkavians together for gatherings through "The Call", a powerful psychic summons. This was the method used to gather the majority of the clan for the Great Prank – the removal of Dementation – before the formation of the Camarilla. Gatherings in modern nights are generally much smaller, and are often called to organize a group activity such as pranking an elder or terrorizing a particular area of a city.

This does not mean that they are in constant telepathic communication, though, nor that they are continually bombarded by one signal after another. For what it is worth, Malkavians spend a very low percentage of their time tapped into the Network. Many hear only a faint fluttering two or three times a year. For the vast majority of his nights, the only company a Malkavian has within his skull is his own dementia. Whatever its true nature, the Madness Network does come across as largely unknowable, even to Malkavians.

Not all Malkavians can access the Network with equal skill, and only the most powerful can use it for their own purposes. The gathering of almost the whole clan, such as the Great Prank, was the doing of six methuselahs. Several high-level powers of the Auspex and Dementation Disciplines allow Malkavians to access and use the Network, and all Malkavians may learn the Talent of Malkavian Time, which allows them to tap into it with greater ease, and even – though with much difficulty – send messages to other Malkavians.

It is indeed possible for a Malkavian to "upload" their consciousness into the shared Madness Network. This is not quite a form of immortality, as what remains on the Network possesses a rudimentary sort of sentience, as much an echo of the vampire's personality as anything else. There is no evidence to suggest that the Network remnants of a Malkavian's personality have any sort of strong ambition or self-awareness, other than being a collection of ideas and memories that fire off when appropriate stimuli present themselves. Whatever "intelligence" remains is incomplete, somewhat broken and rather difficult to reason with – after all, it no longer has the context of a body and a separate set of memories. It is somewhat further outside the bounds of reality, bodiless and indistinct – and, of course, quite mad.

This particular tidbit of lore is not common knowledge at all; it is preserved as one of the greatest secrets of the clan, and it cannot be accessed through the Network itself. Anyone willing to make this final plunge will have to somehow come up with the idea in the first place, and then do the legwork to make it necessary. Nothing is ever easy for the Malkavians.

Malkavian Time mechanic from Lore of the Clans

To outsiders, Malkavians have an uncanny knack for showing up in the right place at the right time. Or, in some cases, the wrong place at the right time. This ability comes from a keenly developed ability known as Malkavian Time. Clan meetings occur on this unwritten schedule, passed through to members by the Malkavian Madness Network. A message is initially sent through some form of media. The sender could write a message on the back of a receipt, whisper something into a cell phone, or press their head against a TV screen. The Malkavians able to receive the message do so by encountering the same media. The receiver will see it written on any receipt in their pocket, hear it over their cell phone line, or have the cable news pundit speak the message directly to them. The Malkavian keeps hearing the message repeatedly until they acknowledge it and take action towards it. Any Malkavian can take Malkavian Time as a Specialty of their Awareness Skill.

Any Malkavians with dots in Awareness can receive messages, but only those with the Specialty can send messages. When a meeting is coming, the Storyteller secretly rolls Perception + Awareness (difficulty 6). Successes clue the Malkavian in to an upcoming meeting. The more successes, the more time the Malkavian has to prepare to see the rest of her Clanmates. One success means the meeting just started, two successes means there’s a meeting tonight, three successes means a meeting tomorrow, with each success adding an additional night for the Malkavian to prepare. Sending messages requires a Wits + Awareness roll (difficulty 6). Every success means the message gets out on another form of media.

On this link, you will find an exhaustive Madness Network that had been GM-made, based on the official NPCs, placed all over the Tapestry, and on the GM's own brain. You will find about two thousand names on this Tapestry, giving you the perfect tool for any curious Malkavian PC willing to dive into it and for the easy creation of any kind of NPC you might need. 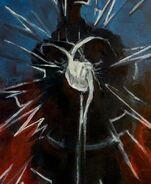